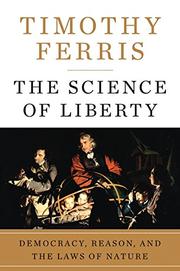 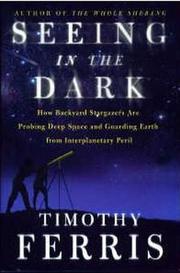 SEEING IN THE DARK: HOW BACKYARD STARGAZERS ARE PROBING DEEP SPACE AND GUARDING EARTH FROM INTERPLANETARY PERIL
by Timothy Ferris
NON-FICTION
Released: Sept. 1, 2002

SEEING IN THE DARK: HOW BACKYARD STARGAZERS ARE PROBING DEEP SPACE AND GUARDING EARTH FROM INTERPLANETARY PERIL
by Timothy Ferris
"Mysteries, menaces, and thrills for the skyward eye."
A first-rate science-writer (The Whole Shebang, 1997, etc.) delves into his lifetime passion for stargazing, and the result is essential reading for kindred spirits and all would-be astronomers. Read full book review > 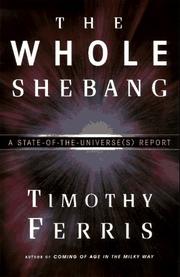 NON-FICTION
Released: May 1, 1997
THE WHOLE SHEBANG: A STATE-OF-THE-UNIVERSE(S) REPORT
by Timothy Ferris
NON-FICTION
Released: May 1, 1997
THE WHOLE SHEBANG: A STATE-OF-THE-UNIVERSE(S) REPORT
by Timothy Ferris
As Virgil led Dante through the thickets and circles of the inferno, so Ferris, a science writer's science writer, guides the reader through the clouds and bubbles, the singularities and uncertainties that characterize cosmology today. What is so rewarding about the Ferris tour is that he is authoritative without being prescriptive; even-handed without being all-accepting; and above all rational. When an author wites of James Trefil commenting about ``looking in the face of God,'' or Stephen Hawking concluding that a unified theory of physics would mean that ``we would know the mind of God,'' and describes it as so much God-mongering, you know you are in safe hands. Yet thinking about the structure and origins of the universe, and about the weird world of quantum mechanics, has much of the nonrational about it. Ferris (Coming of Age in the Milway Way, 1988, etc.) not only provides chapter and verse on the paths leading from Einstein and Bohr to Feynman and Gell-Mann to Wheeler and Bohm, but he also deftly limns the backgrounds and personae of today's rival theory-makers. In the end we find ourselves contemplating a 10-dimensional universe (possibly one in a ``multiverse''), in which six of the original dimensions shrink to all-but-nothingness, leaving our own familiar four (space-time) populated by microcosmic superstrings. The universe is essentially ``flat'': Wherever we look it appears to be made of the same stuff relatively evenly distributed among galaxies and dark matter and the like. Close up, random fluctuations account for the accretions of matter that gave rise to our ``local group'' (which includes the Milky Way) and other larger clusterings. Indeed, it is the tools of Hubble and other ingenious probes that are turning cosmology into a science. There is much joy and beauty in this passage from speculation to demonstration, and we have Ferris to thank for his superb rendering, both of the shebang and of the science that studies the shebang. (Book-of-the-Month Club split main selection; History Book Club alternate selection) Read full book review > 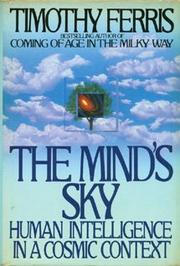 NON-FICTION
Released: Jan. 15, 1992
THE MIND'S SKY: HUMAN INTELLIGENCE IN A COSMIC CONTEXT
by Timothy Ferris
NON-FICTION
Released: Jan. 15, 1992
THE MIND'S SKY: HUMAN INTELLIGENCE IN A COSMIC CONTEXT
by Timothy Ferris
Ferris, who usually pokes around in outer space (Coming of Age in the Milky Way, The Red Shift, etc.), probes the inner kind as well in these amusing if far-fetched essays on the human mind, the search for extraterrestrial (and thus nonhuman) intelligence (SETI), and their intersection. For Ferris, SETI is a ``campaign of exploration,'' not a science, and all the more appealing for that; lying on the edge of knowledge, it proves fertile soil for the most extravagant musings. Where might a SETI signal come from, Ferris wonders? In a sort of computer-jock's ultimate wet dream, he imagines an ``interstellar network'' of automated space stations (``the most knowledgeable entity in the galaxy'') transmitting signals to similar networks in other galaxies. This Boschian vision leads to an exciting discussion of ``virtual reality,'' wherein computers simulate a foreign environment (say, the landscape of Mars) for stay-at-home explorers. Perhaps, Ferris posits, aliens are at this very moment sending us virtual-reality reproductions of their home planets. Ferris's ponderings also veer between the provocative and the preposterous. One bright essay analyzes star football quarterback Joe Montana as an uncanny example of a ``pre-motor cortex virtuoso,'' but another piece clumsily reduces mystical experience to a fuzzy ``confrontation'' with a ``program'' in the ``inner architecture'' of the brain. Other chapters, which read for the most part as independent pieces, consider comet strikes as a source of species extinction, near-death experience, apocalyptic prophecies, information theory, and the origin of laughter. Ferris's style remains as playful as ever (``we who came down from out of the forest seek to grow a forest of knowing among the stars''); too bad the thoughts seem sometimes stretched beyond their capacity to hold or convey the truth. The mind's sky indeed—but with clouds. Read full book review >

Released: Jan. 31, 1990
THE WORLD TREASURY OF PHYSICS, ASTRONOMY AND MATHE
by
Released: Jan. 31, 1990
THE WORLD TREASURY OF PHYSICS, ASTRONOMY AND MATHE
by
The title's a bit grandiose, since this 864-page anthology deals almost solely with Western science and, moreover, except for a few poems, includes no pre-20th-century entries (no Newton, for instance). . .but never mind. What's between the covers is magnificent, a royal flush of exemplary passages, expertly edited by Ferris (Coming of Age in the Milky Way, etc.), by scientists who write (Feynman, Hawking, Einstein, etc.) and writers who write about science (Annie Dillard, Primo Levi, Ferris himself). Included are firsthand accounts of scientific breakthroughs (Einstein on "E=MC2," Heisenberg on "The Copenhagen Interpretation of Quantum Theory"); science exposition (Carl Sagan and Anne Druyan on "Astride the Comet"); memoir (Stanislaw Ulam on "Los Alamos"); philosophy (Heisenberg again, on "Positivism, Metaphysics, and Religion"); biography (C.P. Snow on "Rutherford," Lee Dembart on 77-year-old "Paul Erdos: Mathematician," who has no home, having "traveled continuously for 50 years, never spending more than a month in one place"). Poems by Whitman, Updike, Pope, and many others round out this splendid, deeply informative volume, first in a projected series of World Treasuries (others will cover religious thought, science fiction, mystery and detection, and so on). Read full book review >