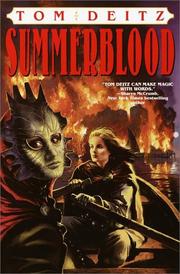 SCIENCE FICTION & FANTASY
Released: April 10, 2001
SUMMERBLOOD
by Tom Deitz
SCIENCE FICTION & FANTASY
Released: April 10, 2001
SUMMERBLOOD
by Tom Deitz
Third installment of Deitz's saga about the kingdom of Eron (Springwar, 2000, etc.). Avall has won the struggle against his rivals and is now High King of Eron, plus master of the magical gems that feed on blood and confer astonishing powers. This time, young Avall must contend with the secretive but deadly fanatics of the priesthood of the Ninth Face, who have their own cogent reasons for wanting to depose Avall and claim his gemstones. Meanwhile, warrior Merryn, Avall's twin sister, has her own problems. Plots, dastardly deeds, cliffhangers, treachery: Business as usual in vampire-gemstone-land.Read full book review > 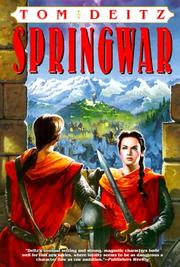 SCIENCE FICTION & FANTASY
Released: July 12, 2000
SPRINGWAR
by Tom Deitz
SCIENCE FICTION & FANTASY
Released: July 12, 2000
SPRINGWAR
by Tom Deitz
Second installment of Deitz's extended fantasy, begun with Bloodwinter (1999), about the quarreling kingdoms of frigid Eron and desert Ixti. Eronese master craftsman Avall has discovered a remarkable gem that, when fed blood, confers various mental powers. Others, however, scheme to relieve him of it: Avall's rival, the rapist Eddyn; the exiled Prince Kraxxi of Ixti (how useful it would be, he thinks, in the war his father is planning against Eron); and a bunch of renegade priests, fearful that the gem allows direct contact with their eightfold god (thus rendering their priesthood superfluous). Matters wallow along in a morass of plots, treachery, double-dealing, and cliffhangers. Deitz does supply a recap, but overall this is heavy and rather unpleasant stuff, best suited to fans of the previous book. Read full book review > 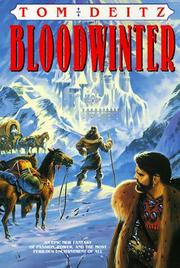 SCIENCE FICTION & FANTASY
Released: April 13, 1999
BLOODWINTER: A TALE OF ERON
by Tom Deitz
SCIENCE FICTION & FANTASY
Released: April 13, 1999
BLOODWINTER: A TALE OF ERON
by Tom Deitz
First of a new doorstopper fantasy series from the author of Dreamseeker's Road (1995), etc. Desert kingdom Ixti's regime is aristocratic; in frigid, neighboring Eron, people are organized into craft guilds confusingly called "clans." Arrogant young Eronese craftsman Eddyn rapes and impregnates the beautiful Strynn. To preserve the Balance, the Clan chiefs decree that Eddyn's cousin, Avall, shall wed Strynn, and all three will be posted to Gem-Hold for the winter. Here, they'll mine gemstones and make articles for King Gynn's royal regalia. Avall's sister Merryn, having humiliated Eddyn during ritual war games, goes to War-Hold. Hunting in Ixti, Prince Kraxxi accidentally impales his younger brother, King Barrax's favorite, and flees. Merryn apprehends Kraxxi and, unaware of his identity, takes him as her lover. Avall, meanwhile, discovers an extraordinary gemstone that feeds on blood (a familiar Deitz icon).When Avall and friend Rann both feed the gem, they're also able to share their minds! Soon Avall finds that he can telepathically contact Merryn, too! Eddyn continues to skulk and spy on Avall and Strynn; he touches the gem, but it hates him. Avall decides that the Clan bigwigs must be told about the gem, and leaves with Rann. Eddyn does inform trainee priest Rrath about the gem; but Rrath's clandestinely involved with a secret society that orders the pair to pursue Avall through the snow. Avall, sharing with herder woman Div, learns that the carnivorous birkits are both sentient and telepathic, so when Eddyn and company attack, the birkits defend them. Avall, wounded, falls into an icy river. Kraxxi flees from Merryn, but King Barrax's chief torturer captures them both. Some promising ideas, set forth at interminable length, with youthful and largely indistinguishable characters; a sketchy backdrop; and not even a token ending. Your move. Read full book review > 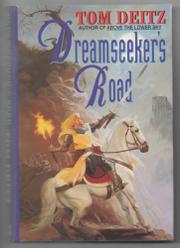 SCIENCE FICTION & FANTASY
Released: July 1, 1995
DREAMSEEKER'S ROAD
by Tom Deitz
SCIENCE FICTION & FANTASY
Released: July 1, 1995
DREAMSEEKER'S ROAD
by Tom Deitz
In this latest installment of an established fantasy series about overlapping Faerie worlds, college buddies David Sullivan, Alec McLean, and Aikin Daniels get together the day before Halloween to hunt deer. Alec possesses a magical ``ulunsuti,'' given to him by a Cherokee shaman, that can grant visions and give access to Faerie but that must be fed with fresh blood. The ulunsuti vouchsafes each man a prophetic dream. David, who can actually see the Straight Tracks that connect the magical worlds, witnesses the circumstances in which his beloved uncle and namesake was mysteriously killed by a grenade in the Middle East. Alec is bidden to seek out Aife, his Sidhe lover who also betrayed him. And the ever-curious Aikin is shown a route into Faerie. Alec, then, is seduced by Rhiannon, Queen of Ys, who pretends to be Aife in order to steal the ulunsuti. Aikin, having blundered into Faerie only to be pursued by the fearsome Wild Hunt, is saved by an ``enfield,'' a fox with eagle's feet and shapeshifting powers. David learns how his uncle diedNeman, the trickster sister of the Morrigu, the Sidhe mistress of battles, set him upand he is granted a last interview with his namesake. Snarling, yelping, imaginative, uncouth entertainment for the more adolescent-minded part of the audience: better than Above the Lower Sky (1994) but not by much. Read full book review >

FICTION & LITERATURE
Released: Dec. 1, 1994
ABOVE THE LOWER SKY
by Tom Deitz
FICTION & LITERATURE
Released: Dec. 1, 1994
ABOVE THE LOWER SKY
by Tom Deitz
A hardcover debut from the author of numerous fantasy paperbacks (The Soulsmith trilogy, etc.). During a hurricane in Ireland, resident American writer Kevin Mauney is visited by a selkie (a were-seal), who conveys an urgent message requesting his presence in Aztlan Free Zone, Mexico. In Aztlan, meanwhile, Cherokee diplomat and native dancer Thunderbird O'Connor stumbles upon a dying man, skinned alive and abandoned on the beach. Also in Aztlan, Carolyn Mauney-Griffith, Kevin's biologist sister, investigates a baffling mass beaching of dolphins, who seem to have been attacked by killer whales. As Kevin hotfoots it to Aztlan, Thunderbird is assaulted by were-orcas clad in human skins, while Cary drowns—then, impossibly, returns to life. What's going on? Well, it transpires that rebellious young were-orcas have decided to attack humanity by first exterminating its allies, the dolphins; the latter's magicians have thought up a plan, involving the three humans, to combat the evil whales. Some readers—the younger and more credulous section of the audience—may find the snappy, briny antics here exhilarating; the far-fetched multiplicity of were-things will strike many others as just plain daft. Read full book review >