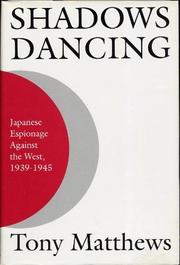 HISTORY
Released: April 19, 1994
SHADOWS DANCING: JAPANESE ESPIONAGE AGAINST THE WEST, 1939-1945
by Tony Matthews
HISTORY
Released: April 19, 1994
SHADOWS DANCING: JAPANESE ESPIONAGE AGAINST THE WEST, 1939-1945
by Tony Matthews
A plodding account of one of the most fascinating of WW II stories—how Japan sought to spy on the Allies through neutral countries. Most notable among the points of entry for Japanese spy rings were the embassies and consulates of Spain, Portugal, and Latin America. The spy network (code-named TO) provided details on such matters as Allied manufacturing, morale, and troop and convoy movements. Eventually, the US intercepted and decoded these reports, enabling the Allies to crack spy rings operating on their shores and helping them to anticipate major military maneuvers (e.g., Admiral Chester Nimitz knew the Japanese order of battle at the Battle of Midway). These thousands of once top-secret ``Magic'' summaries, many only recently declassified, form the backbone of this history (first published in Great Britain) by Welsh-born Matthews, who now lives in Australia. Matthews discusses how these operations were set up, who its operatives were, how the network was tested, and how it only ceased operations three months after the dropping of the atomic bomb. The author rightly believes that these intercepts contain a dramatic story. But, addicted to unbroken, verbatim transcriptions of the reports, he provides neither coherent explanation of the events' significance nor adequate description of personalities. He alleges, for instance, that the Japanese worked with African-American groups, including the NAACP, to establish espionage and sabotage operations, but he fails to cite sources for such charges or to describe how these operations were set up. He also mentions a particularly hair- raising story about how the Japanese, having discovered the defection of a diplomat/espionage agent in Stockholm, plotted to have him murdered—without describing the denouement of the tale! Moreover, the account is sometimes marred by lazy editing (e.g., then Secretary of State Cordell Hull is referred to as the undersecretary of state). This is compelling material worthy of treatment by Gordon Prange or Len Deighton, but it's told here by a sloppy researcher with poor narrative gifts. (B&w photos) Read full book review >