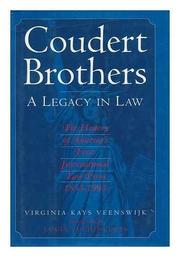 BIOGRAPHY & MEMOIR
Released: April 7, 1994
COUDERT BROTHERS: THE HISTORY OF AMERICA'S FIRST GLOBAL LAW FIRM
by Virginia Kays Veenswijk
BIOGRAPHY & MEMOIR
Released: April 7, 1994
COUDERT BROTHERS: THE HISTORY OF AMERICA'S FIRST GLOBAL LAW FIRM
by Virginia Kays Veenswijk
Engrossing corporate history of the Manhattan-based Coudert Brothers—the prototype of today's far-flung international law firms. Coudert Brothers began as an anomaly: a New York law firm with an international practice founded at a time (1857) of American provincialism and isolation, and composed of devout Catholics in a predominantly Protestant country with widespread anti-Catholic sentiment. Still, Coudert Brothers thrived and even achieved prominence representing Spanish and French corporate and individual clients. The original Coudert brothers (Frederic RenÇ, Charles, and Louis Leonce) were sons of Charles Coudert, a Bonapartist who escaped a Bourbon prison to flee to New York in 1822. While thoroughly American in many ways—Frederic RenÇ even became an important leader in the New York State Democratic party—the Coudert sons were also fluent in French and Spanish, and had a sensitivity to ÇmigrÇ communities, traits leading to their quickly developing a successful practice in the New York and federal courts in admiralty, estates, and general civil litigation. Veenswijk describes Frederic RenÇ's participation in several important international arbitrations, including an unsuccessful attempt by the US government to condemn British exploitation of Siberian seals, and its mediation of a border dispute between Britain and Venezuela. By the 1890's, Coudert Brothers was a ``giant among law firms'' and a family business with continuity; on the death of Charles Coudert, Jr., in 1897 and Frederic RenÇ in 1903, foster brother Paul Fuller and Frederic RenÇ, Jr., assumed the mantle. Veenswijk describes the explosive growth of the firm under Frederic, Jr., and his son, Alexis Coudert. While law practice changed dramatically in the century that followed—by Alexis' death in 1980, the practice of law was a high-pressure, round-the-clock business—Veenswijk shows that the firm's humane, civilized character, excellence in international law practice, and devotion to quality survived. An absorbing history of one of America's great law firms. Read full book review >