NON-FICTION
Released: June 1, 1997
FORCED EXIT: THE SLIPPERY SLOPE FROM ASSISTED SUICIDE TO LEGALIZED MURDER
by Wesley J. Smith
NON-FICTION
Released: June 1, 1997
FORCED EXIT: THE SLIPPERY SLOPE FROM ASSISTED SUICIDE TO LEGALIZED MURDER
by Wesley J. Smith
An anti-euthanasia activist blasts the right-to-die forces, calling their goal ``a social experiment that will lead to cultural and ethical catastrophe.'' As the attorney for the International Anti-Euthanasia Task Force, Smith appears frequently on radio and television to argue against what he calls ``the death culture.'' Opponents of assisted suicide—Smith uses the terms ``assisted suicide'' and ``euthanasia'' interchangeably—will find this a valuable debating manual, for it presents the most common pro-euthanasia arguments and then provides considered responses to them. Noting similarities between today's euthanasia movement and the one that flourished in Germany earlier in this century (despite the compassion that motivates contemporary supporters), and citing the results of what he refers to as ``death on demand'' in the Netherlands, he warns that granting the right to die to the terminally ill will soon be followed by legal killing of the disabled, the chronically ill, and even the depressed. Smith looks at the defeat of referendums to legalize euthanasia in Washington State and California, and examines weaknesses in the safeguards against abuse included in a similar Oregon referendum that narrowly passed but is now tied up in the courts. HMOs, with their emphasis on controlling costs by limiting services, and euthanasia are a deadly combination, he says, predicting that ``the day doctors are legally allowed to kill patients, Wall Street investors in for-profit HMOs will be dancing in the streets.'' A phrase-maker of no mean talent, Smith titles his last chapter ``Hospice or Hemlock: The Choice is Ours.'' In it he argues that we must create a culture of compassion that empowers the disabled, sees every patient as valuable, and provides end-of-life care to the dying. Powerful arguments from a passionate, articulate, sometimes strident spokesman. (Author tour) Read full book review > 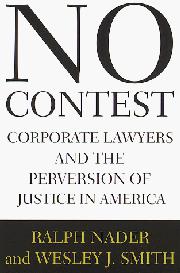 NO CONTEST: HOW THE POWER LAWYERS ARE PERVERTING JUSTICE IN AMERICA
by Ralph Nader, Wesley J. Smith
NON-FICTION
Released: Oct. 1, 1996

NO CONTEST: HOW THE POWER LAWYERS ARE PERVERTING JUSTICE IN AMERICA
by Ralph Nader, Wesley J. Smith
A blistering attack on the tactics used by powerful lawyers to defend major corporations. Lawyers have a responsibility to defend their clients zealously, concede consumer activist Nader and attorney Smith in their third collaborative effort (Collision Course: The Truth About Airline Safety, 1993, etc.). But, they contend, the "power lawyers" who work for the nation's largest law firms and who defend its biggest corporations use the "mantra" of zealous representation to justify a host of misdeeds, from trampling individual rights to overlooking or even covering up corporate evil. The perversion of justice they describe in the title comes from an imbalance: Power lawyers can marshal the vast resources of huge law firms to overwhelm their opponents (usually individual plaintiffs represented by lawyers from small firms) and make themselves vastly wealthy in the process. It is not just individual claimants who lose out, the authors claim, but vast numbers of ordinary citizens who are injured or killed when corporations choose legal stonewalling over correcting product defects. Nader and Smith illustrate their arguments with dozens of cases, such as General Motors' decision to fight each lawsuit brought against exploding gas tanks in certain of its pick-up trucks rather than correct the problem. Other cases demonstrate the stonewalling tactics used by power lawyers, including delaying trials for years, destroying vital documents, bringing frivolous harassment suits against individuals, and making confidentiality a condition of out-of-court settlements, meaning that the next plaintiff with the identical grievance must start from scratch. The authors are critical of tort reform legislation pending in Congress, which they claim would offer "a perpetual bailout for polluters, swindlers, reckless health care providers and makers of tobacco, defective vehicles, dangerous drugs, and many other hazardous consumer products." A brilliantly constructed attack on corporate legal defenders that ends with a rousing call to lawyers to remember ethics and idealism, but likely to enrage more lawyers than it inspires. Read full book review > 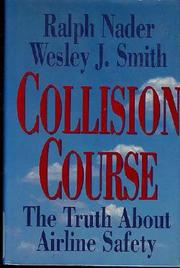 NON-FICTION
Released: Sept. 10, 1993
COLLISION COURSE: THE TRUTH ABOUT AIRLINE SAFETY
by Ralph Nader, Wesley J. Smith
NON-FICTION
Released: Sept. 10, 1993
COLLISION COURSE: THE TRUTH ABOUT AIRLINE SAFETY
by Ralph Nader, Wesley J. Smith
Or, Unsafe at Any Altitude: a measured, albeit merciless, critique of commercial aviation's safety policies and practices. Drawing on publicly available data, Nader (coauthor, The Big Boys, 1986, etc.) and Smith (Witness to Murder, 1991) make a persuasively documented, often chilling case for the proposition that in many respects flying is not safe enough. More disturbingly, they argue that the level of risk appears to be growing. Going well beyond accident and fatality statistics, the veteran consumer advocates cast a cold eye on the institutional factors that can make life-or-death differences for air travelers. Shortly after takeoff, for instance, they strafe the FAA (a slow-moving bureaucracy charged with promoting commercial aviation as well as air safety) and deregulation (in their view, an ill-advised experiment that has strained the airline industry's finances, tempting it to cut corners). Targeted as well are the deteriorating condition of the US air-traffic-control (ATC) network; the aging of America's jet fleet (now among the world's oldest); airport security; the ongoing use of dangerous (i.e., flammable and/or toxic) materials in passenger cabins; and the failure of federal officials to insist that carriers equip their planes with state-of- the-art systems. The authors' reform agenda calls for at least modified re-regulation that would subject commuter lines to the same safety standards as trunk carriers; eliminate the FAA's dual mandate and make it a genuinely independent agency with a tenured administrator; establish a separation ATC service; and scrap cost/benefit analyses of issues in which lives might be at stake. Mindful that their recommendations are unlikely to be embraced or adopted soon, the authors close with a catalogue of tips on surviving crashes or allied emergencies—and becoming an activist in the cause of air safety. An impressive marshalling of grim fact and outraged opinion. Read full book review >

Released: Sept. 1, 1991
WITNESS TO MURDER
by Wesley J. Smith
Released: Sept. 1, 1991
WITNESS TO MURDER
by Wesley J. Smith
And not just any witness, either—burned-out N.Y.C. reporter Neal Schacker watches his most ruthless enemy kill a man while he (Neal) is having an out-of-body experience, in this first novel by consumer- advocate Smith (The Doctor Book, The Lawyer Book). Hard-bitten Schacker—on the skids since his charges of powerful politico Franklin Grady's heavy involvement in drug-dealing backfired into a thumping libel suit—first gets interested in astral projection as part of a do-or-die assignment to investigate the claims of messianic spiritual leader Tefuni Hagama. Initially skeptical (``what was all of that God stuff about, anyway?''), Schacker changes his tune—and, eventually, his soul's address—under the tender ministrations of Hagama's gutsy follower Rachael Moore. But Schacker's unwonted new tenderness (``the icecaps of his soul had melted'') is devastated when his soul happens to witness Senator-elect Grady's murder of a slightly less crooked colleague—especially when his phone call to the police ends in his own arrest for murder, his only defense against the ensuing legal threats and notoriety (``his life was literally being lived in a fish bowl'') the looniest testimony of the season. Fortunately, after he's perverted his abilities for soul- travel in order to spy on Grady and torment him, Schacker's final astral projection merges his soul with redemptive Rachael's just in time to avoid his witnessing his own murder. An inspired premise freighted with sincere melodrama. Read full book review >