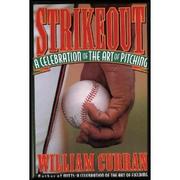 NON-FICTION
Released: March 1, 1995
STRIKEOUT: A CELEBRATION OF THE ART OF PITCHING
by William Curran
NON-FICTION
Released: March 1, 1995
STRIKEOUT: A CELEBRATION OF THE ART OF PITCHING
by William Curran
A slow-moving but enjoyable appreciation and history of pitching and pitchers. Curran (Big Sticks, 1990, etc.) examines the position's evolution against the backdrop of baseball's growth, the improvements in equipment and ballparks, and its ever-changing rules. As he traces the origins of organized baseball back to the 1845 New York Knickerbockers' gentlemanly rules and regulations, he observes that the pitcher's job then was to lob a hittable ball to a batsman who was allowed to specify its location. Curran follows rules changes regarding distance from mound to plate, size and elevation of the mound, the positioning of the catcher, and the composition of the ball itself, showing how the game was affected both obviously and subtly. As late as 1882, pitchers were still required to throw underhand, though they were ``permitted to confound the batter with speed and curves.'' The author takes a fascinating look at batting averages and earned-run averages in light of rules changes and during times such as the ``dead ball era'' of 1901 to 1919. He scarcely touches on the modern era, but does justice to pitchers such as A.G. Spalding, who won 207 games for the Boston Red Stockings in the 1870s and was one of the game's first superstars, and Bobby Mathews, whose ``mystery pitch'' (i.e., spitball) won 298 games for the Tammany Hallsupported Mutuals in the 1880s. While Curran's digressions often stall the book's progress, he offers entertaining, if brief, profiles of such greats as Walter Johnson, Christy Mathewson, Rube Waddell, Kid Nichols, Bob Feller, and Dizzy Dean. He also takes an amusing look at a few of the game's flakier pitchers, including Moe Drabowsky and Mark ``The Bird'' Fidrych, and provides a historical, statistical, and pop-psychological analysis of left-handers. Fun and informative, though the slackadaisical writing style eventually proves tiresome. (16 b&w photos, not seen) Read full book review >