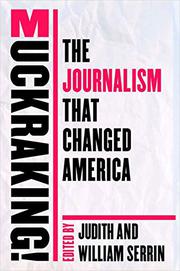 MUCKRAKING!: THE JOURNALISM THAT CHANGED AMERICA
edited by Judith Serrin, William Serrin
"Wholly absorbing, intensely illuminating."
A dazzling collection of some of the most significant examples of US investigative journalism of the past 250 years. Read full book review > 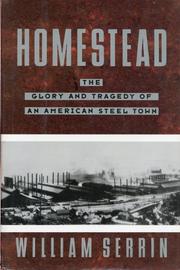 NON-FICTION
Released: Oct. 2, 1992
HOMESTEAD: THE GLORY AND TRAGEDY OF AN AMERICAN STEEL TOWN
by William Serrin
NON-FICTION
Released: Oct. 2, 1992
HOMESTEAD: THE GLORY AND TRAGEDY OF AN AMERICAN STEEL TOWN
by William Serrin
A profoundly moving elegy on the death of a legendary Pennsylvania steel town—and, by extension, the end of a century of Smokestack America—from Serrin (Journalism/NYU), a former labor correspondent for The New York Times. The Homestead Steel Works was the site of the epic 1892 strike and lockout that saw steel chieftains Andrew Carnegie and Henry Clay Frick use the Pinkertons to crush the Amalgamated Association of Iron, Steel, and Tin Workers and set back the cause of unionism several decades. Serrin's account is more comprehensive than Paul Krause's The Battle for Homestead, 1880-1892 (p. 654), for it follows ``America's most famous steel town'' through another 100 years that saw its fortunes rise and fall with that of the town's company overlord, U.S. Steel, and even the nation as a whole. During this time, Homestead steel was used for America's skyscrapers, railroads, bridges, and battleships (during WW II, U.S. Steel alone produced as much steel as the Germans). Serrin covers, with an often acerbic eye, the major corporate and labor leaders who became a part of the town's history, including Carnegie, Frick, Charles Schwab, Judge Elbert Gary, John L. Lewis, and Philip Murray. But his real contribution is in detailing how the town's heyday in the 1950's and early 1960's masked problems in long-term planning and out-of-date equipment, and in the corruption, complacency, and authoritarianism of both management and labor. Serrin discusses with mixed rage and pity the fraying of ties in this once vibrant community after the mill's closing in July 1986: declining schools, half-empty churches, ineffectual government, deteriorating homes, and a rash of heart attacks and suicides by men who could not find work again. A devastating, heartbreaking object lesson in ``how America uses things...then discards them.'' Serrin has made Homestead's tragedy our own. (B&w photos—16 pages—not seen.) Read full book review >