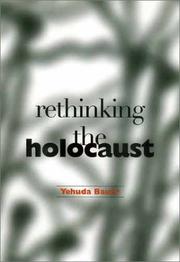 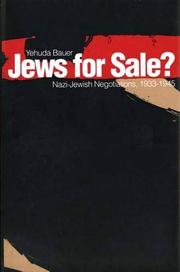 HISTORY
Released: Nov. 16, 1994
JEWS FOR SALE?: NAZI-JEWISH NEGOTIATIONS, 1933-1945
by Yehuda Bauer
HISTORY
Released: Nov. 16, 1994
JEWS FOR SALE?: NAZI-JEWISH NEGOTIATIONS, 1933-1945
by Yehuda Bauer
Bauer offers an eye-opening look into the following question: Could Jewish leaders in America, England, Palestine, and occupied Europe itself have ransomed significant numbers of their brethren? Bauer (Holocaust Studies/Hebrew Univ., Jerusalem; coauthor, A History of the Holocaust, 1982) examines carefully the motives of both Nazi figures (particularly SS head Heinrich Himmler) and various Jewish counterparts. His focus is on four ransom efforts: the Ha'avera (or ``transfer'') agreement by which considerable numbers of German Jews were permitted to emigrate to Palestine between 1933 and 1939 in exchange for large-scale purchases of German goods; the ``Europa Plan,'' advanced by Slovak Jewish leaders in 1943 to halt deporations to the death camps in exchange for a multimillion dollar payment; the famous ``Joel Brand affair'' of 1944, which was (inaccurately) said to have involved a proposed exchange of a million Jews, most in Hungary, for 10,000 trucks; and some far more modest, but also more successful, ransom efforts during the war's final months. After combing German, English, and Hebrew sources, Bauer concludes that Jewish leaders within and outside of occupied Europe achieved ``only partial and marginal successes'' in trying to rescue the ever-shrinking remnant of European Jewry. The Allies, bent on driving the Germans to an unconditional surrender, balked at cooperating with Jewish ransom efforts. For their part, the Nazis were ambivalent, at times committed to murdering every last European Jew, at times willing to make exceptions, particularly when it became clear that they would lose the war. Finally, some of the Jews who transmitted messages to and from the Nazis, and in rare cases dealt directly with them, were what Bauer terms ``shady underworld figures'' trusted neither by ``establishment'' Jewish leaders nor by the Allies. Bauer also looks at several key rescue efforts by non-Jews. Throughout this exemplary work of scholarship and clear historical narrative, Bauer's historical judgments are as balanced and fair-minded as his research is meticulous. A pathbreaking, superb contribution to Holocaust studies. Read full book review >