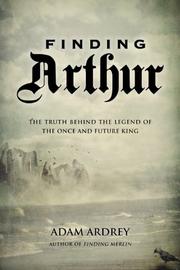 The True Origins of the Once and Future King
by Adam Ardrey
BUY NOW FROM
AMAZON
BARNES & NOBLE
LOCAL BOOKSELLER
GET WEEKLY BOOK RECOMMENDATIONS:

Attorney Ardrey (Finding Merlin: The Truth Behind the Legend of the Great Arthurian Mage, 2013), a master of investigating minutiae, analyzes just about every word ever associated with Arthur to establish the true history of the legend.

The author’s legal mind asks every question and explores every possibility, and he dissects all the main stories linked to the Arthurian legend, among them the Welsh monk Nennius’ The History of the Britons (circa 830), the works of the Dark Age poet Aneirin, Geoffrey of Monmouth’s History of the Kings of Britain (circa 1136) and Thomas Malory’s Le Morte D’Arthur (1485). Ardrey’s ability to take the smallest evidence and develop it into the answer he’s looking for will impress many readers. Even as earlier writers adapted Arthur to fit either their patrons’ needs or avoid the censure of the Catholic Church, so Ardrey fits the tales of Camelot, Excalibur and Avalon neatly into the geography of Scotland. After years of argument over whether this king was from Wales, Devon or Cornwall, the author’s arguments make enough sense that readers will be inclined to accept them as fact. What set him off on this quest was his discovery of an Irish-English dictionary based on sixth-to-ninth–century sources, and differences in languages in various regions enabled him to trace the earliest history of the Scots. He describes the word origins of the names and places associated with the king, right down to naming him as Arthur Mac Aedan. The author claims that without Wallace and Bruce, Scotland would never have survived, but without Arthur and Merlin, it never would have been born. He also provides a useful chronology and glossary of names.

Ardrey puts forth well-made arguments backed by archaeology, etymology and geography. Although the book is occasionally prolix and repetitious, it will have readers rooting for a Scottish Arthur.

IN THE LAND OF GIANTS
by Max Adams
Fiction