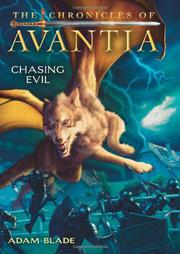 The second in the Chronicles of Avantia, this tale continues the thrilling saga of Tanner and Gwen as they, along with their powerful beasts Firepos and Gulkien, try to save the Kingdom of Avantia from ruin.

Tanner and Gwen have recovered one piece of the Mask of Death from the evil Derthsin, the first step in their plan to thwart the fiend in his desire to collect all four pieces. If Derthsin can assemble the mask, he will wield dark power over all of Avantia, including its beasts. They are shocked to discover that Gwen’s twin brother Geffen has betrayed them, providing Derthsin with the first piece of the mask and the location of the second. Now, they must beat Derthsin to the second piece and rescue the treacherous but naive Geffen, who has become Derthsin’s prisoner. Along the way, they join up with a third chosen rider, an obnoxious and difficult young man called Castor, and his catlike beast Nera. As fast-paced as its predecessor, this volume is more compelling because the characters and their relationships begin to get a bit more complicated. Firepos, Tanner’s beast, again narrates part of the story in first person, creating a sense of immediacy as well as providing a glimpse into the perspective of the beasts, revealing them as full participants in the quest rather than mere transportation.

Readers will be clamoring for the next volumes in this gripping, easy-to-read, high-interest series, which is a terrific introduction to the genre. (Fantasy. 8-12)

A WORLD WITHOUT HEROES
by Brandon Mull
Children

ALCATRAZ VERSUS THE EVIL LIBRARIANS
by Brandon Sanderson
Children