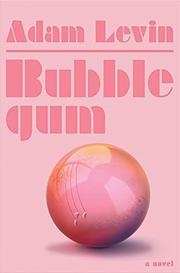 The past isn’t even past—but the one postmodern fictionalist Levin imagines is stranger than most.

Levin turns in a big, futuristic shaggy dog tale, except that the dog isn’t so shaggy. In fact, it’s a rather tidy, lovable little critter called a Curio, or “cure,” a sort of emotional support animal that lends itself to all kinds of bad treatment. In Levin’s future—or past, that is, since most of the action ranges between the early 1980s and the early 2010s—the technological advances we’ve become used to are absent: There are no iPhones, no internet, no Facebook. You’d think that such lacunae would make people feel happy, but instead strange forms of life have been concocted, with inanimate objects capable of feeling and voicing discontent and pain as well as acquiring some of the traits the humans around them possess. Levin’s hero in this overlong but amusing story is an alienated memoirist with the science-fictional name of Belt Magnet. But then, everyone in this story has an unusual moniker: Lotta Hogg, Jonboat Pellmore-Jason, Blackie Buxman, and so forth. His cure has the name Blank, “short for Kablankey, the name I’d given it, at my mother’s suggestion, for the sound of its sneeze.” By the end of the story, even though Blank is a mass-produced laboratory thing, the reader will care for him/it just as much as Belt does—and will certainly be shocked by the horrible things some of the characters do to the inanimate and lab-born things among them. Says a guy named Triple-J, brightly, “Let’s use those Band-Aids to Band-Aid a cure to the slide at the playground, throw some rocks at it from a distance, and see if something revolutionary develops—some new kind of Curio interaction that doesn’t end in overload, and that we never would have expected to enjoy.” If Levin’s point is that humans are rotten no matter what tools you put in their hands, he proves it again and again.