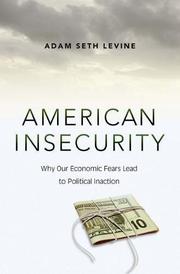 In his first book, a young scholar examines the barriers to political action on a wide range of economic issues that intimately affect millions of Americans.

Single-issue political advocacy has a venerable tradition in America, with citizens voluntarily coming together to move the needle on issues as diverse as gun rights, the environment and abortion. Notwithstanding polls that consistently underscore the importance of issues relating to their financial well-being, people are less willing to mobilize, to spend their time and money affecting public opinion on economic problems such as involuntary job loss or the costs of health care, retirement and higher education. Why? Relying largely on his own experiments and research—elaborate appendices help explain his methodology—Levine (Government/Cornell Univ.) ascribes their reluctance to language, to what he rather awkwardly terms “self-undermining rhetoric.” Put another way, when it comes to an appeal on economic security issues, merely raising the topic reminds people of their own financial vulnerability. This makes them, even those willing to stir themselves on behalf of noneconomic, quality-of-life issues, less eager to engage in collective action when the issues center on their own pocketbooks. It’s the reason, for example, casino employees are cautioned never to make small talk about the state of the economy with their patrons and why a person most affected by rising health care costs might refrain from donating to a group dedicated to reducing them: “I am affected by these rising costs and need the cash.” Nor does Levine hold out much hope for overcoming this rhetorical barrier. Even heroic attempts to reframe the issue cannot avoid the mention of “cost” when it is the very nub of the matter. Unfortunately, Levine’s discussion of this rather small and, some would say, unremarkable point bears all the marks of a warmed-over doctoral dissertation: too elaborate a windup followed by a disappointing delivery, too many needless repetitions and too much clumsy prose.

Strictly for activists, political consultants, pollsters and organizers looking to sharpen their appeals.

WHERE DID THE JOBS GO--AND HOW DO WE GET THEM BACK?
by Scott Bittle
Newsletter sign-up