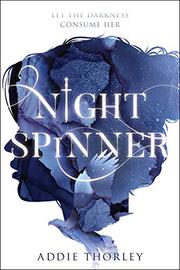 A disgraced warrior fights to restore her sense of self amid war and intrigue in this tightly wound, laser-focused epic.

In Thorley’s (An Affair of Poisons, 2019) immersive sophomore effort, the Ashkar Empire is imperiled, and 18-year-old Enebish, eponymous Night Spinner and sympathetic narrator, isn’t sure where she stands. Wielding the powers of darkness and starfire, Enebish was part of an elite corps drawing its strength from elemental forces until she allegedly massacred innocents. Mutilated and stripped of her abilities, she’s been training eagles at a monastery alongside Serik, her irreverent, magic-barren friend/love interest, ever since. Meanwhile, a generations-long conflict with rival Zemya intensifies as internal rebels rescue criminals and pilfer supplies. Desperate for assistance, Imperial Army Commander Ghoa offers her adoptive sister a shot at redemption, tasking Enebish with capturing rebel leader Temujin. As she grows disenchanted with Ashkar’s self-deified Sky King and Ghoa, Enebish sympathizes with the rebels; soon enough, events force her to reconsider all her loyalties. Thorley’s strength lies at the intersection of worldbuilding and plotting, melding familiar tropes—geographically-defined peoples, gods old and new, a chosen-one narrative—with a gyre of duplicity and scheming that alternatively meets and subverts expectations. Characters hail from different fantasy locales but register as white.

Satisfies as a stand-alone and leaves fans of fantasy, mystery, and thrillers clamoring for more. (Fantasy. 14-18)

THE BRIGHTNESS OF SHADOWS
by Nikki Nye
Adult

AN AFFAIR OF POISONS
by Addie Thorley
Adult

THERE WILL COME A DARKNESS
by Katy Rose Pool
Indie

FEAST OF FATES
by Christian A. Brown
Children