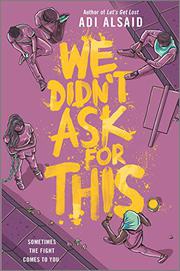 WE DIDN'T ASK FOR THIS

Marisa Cuevas, cued as Latina, is known mostly for being a good student until she, with several followers, chains herself to the doors of Central International School on its legendary high school lock-in night—turning a playful tradition into literal imprisonment. Nobody’s leaving, she says, until each of her 30 environmental demands is met. She’s prepared for condemnation and even fury from her classmates, but she doesn’t expect the unlikely group that forms to protect her. Alsaid (contributor: It's a Whole Spiel, 2019, etc.) takes readers deep into the students’ inner lives, winking all the while to offset the protest’s tragic urgency: Peejay Singh, half Indian/half Scottish, all charm and popularity, desperate to live up to his older brother’s example. Celeste Rollins, the black American new kid who befriends Japanese/British Kenji Pierce through improv but doesn’t yet know his terrible secret. Jordi Marcos (ethnicity and nationality unspecified), the outlier who isn’t sure himself why he’s against the protest—but still is, violently. Finally, Malaysian decathlete Amira Wahid, who finds her mother’s strictures falling away under Marisa’s fierce gaze. Packed with quips and insights, the wry narrative captures the intense yearnings of young adulthood; the ridiculous spectrum of clueless, controlling, and (sometimes) cooperative adults; and the overwhelming inertia of institutions. Several main characters are queer.

A droll, engrossing exploration of privileged teens striving to do better. (Fiction. 13-18)

HOW I RESIST
by Maureen Johnson
Children