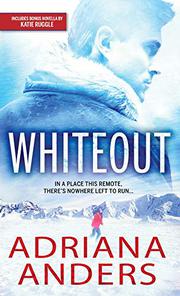 Two survivors of an attack on an Antarctic research base have to withstand a perilous trek to safety while safeguarding the lethal virus that the attackers would do anything to find.

When chef Angel Smith joins a research facility in Antarctica, she’s intrigued by enigmatic scientist Ford Cooper, who keeps to himself and rejects all her friendly overtures. In fact, Ford is uncomfortable with emotions, and Angel's open, tactile nature scares him. Just before Angel and the summer staff are supposed to board the plane taking them home, Angel witnesses a murder in a supply warehouse and hides the ice samples the criminals killed for, switching them out for similar ones. The villains leave the station on a second plane with the wrong samples, and while Angel is looking for a way to escape the freezing tunnel she’s been locked in, Cooper comes back from a satellite base check-in to find the station abandoned, all the communications equipment destroyed, and Angel trying to chop down a door to get to safety. When she tells him what she’s seen, he realizes the men will hunt down the right samples and will kill any witnesses. Their best hope of survival is at the closest nearby station, but they’ll have to ski hundreds of miles to get there. Along the way, they’ll battle villains and the harsh landscape in myriad ways, but the attraction that grows between them becomes one of their greatest strengths, because they’re both determined to save each other. Anders launches a new series with a bang, maintaining a furious pace and setting up geographical, criminal, and emotional dangers that force the characters to find their deepest strengths to survive.

MY WAY TO YOU
by Catherine Bybee
Fiction

A MADNESS OF SUNSHINE
by Nalini Singh
Fiction

THE PRICE OF GRACE
by Diana Muñoz Stewart
Newsletter sign-up