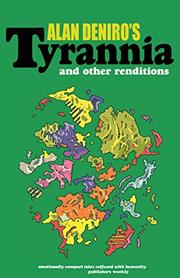 The first two stories in the collection—“Tyrannia” and “A Rendition”—form a creepy introduction to DeNiro’s work. In the former, a political prisoner pays dearly for his “crimes” against the state, and his mutilated body becomes a nesting ground for birds and beetles. In the latter, a trio of inept kidnappers takes hostage a law professor whose political ideas counter their own (although Patrick, the “mastermind” behind the plot, isn’t “afraid of getting caught. Instead, the plan for him [is] a form of self-discovery”). Predictably, things go dreadfully and disturbingly wrong. The bizarrely titled “(*_*?) ~~~~ (-_-): The Warp and the Woof” introduces us to a novelist named Roger who finds an old notebook in which, 20 years previously, he had written his first novel. Since then, Roger has had some success as a hack popular writer, but he sends this notebook to his less-than-enthusiastic agent, who sends the compressed files to consultant Amar’s wristwatch. And from there, the action gets even more bizarre, from the agent’s death to Amar’s having sex with his wife. “The Philip Sidney Game,” the final story in the collection, is actually a “meta-story,” with a narrator named Alan DeNiro finding the manuscript of a story written 12 years before. He then receives a mysterious package with some old computer disks containing three different endings to his story.

While DeNiro’s approach to fiction can be clever, it more often comes across as simply mildly amusing and self-indulgent.