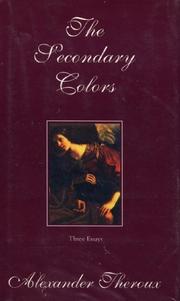  More than you ever wanted to know about orange, purple, and green. With this sequel to his similarly styled The Primary Colors (1994), Theroux has, thankfully, almost reached the end of the rainbow. And while there are a few golden nuggets strewn about, there is also a great deal of dross. For the most part, Theroux doesn't so much write as endlessly accumulate--fact after fact after quote after reference; at times it's like a Nexis search from hell. Mentions of every appearance of purple in literature segue into purple foods, then circles back to literature via purple poems, and then it's on to purple costumes in the movies. Charitably, the effect Theroux is striving for might be called musical, but he hits all the wrong notes. His prose, in particular, tends to a garish purple, full of archaisms gleaned from Shakespeare 101: ``Orange is a bold, forritsome color.'' Though he tends to an eerie kind of death-of-the-author absence, he occasionally veers into obtrusiveness, including attacks on his critics, a churlish dig at the person who claimed to have discovered several plagiarisms in the last book, and leaden personal digressions: ``I myself have always loved too intensely, if intensely means inordinately, with the extended sense of having romantic overexpectations--in a purple way, I think.'' But Theroux is no literary greenhorn. There are a number of thoughtful observations and compelling juxtapositions. And his research is humblingly prodigious. What it reveals most of all is how similar the significances of colors can be. All three colors, for example, have sexual connotations, all three can describe dusk, rain, etc. Theroux also shows how fickle metaphorical meaning can be. Green can signify youth and vitality or, conversely, mold and staleness. The Romans even spoke of ``green'' old age. All in all, a colorless and cumbersome compendium.