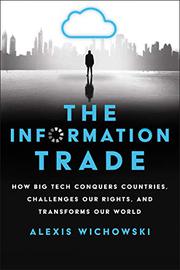 Building on a 2017 Wired article, the author proposes that tech giants such as Facebook, Apple, and Microsoft are “net states,” battlefields and weapons alike in the political and martial realm. “Net states are entities that act like countries,” she writes, as with Silk Road, which, though manifestly engaged in illegal activities, also had a kind of sovereign right over private data entrusted to it by its users. In that case, when two governments wrestled over legal access to that data, a tech company, Microsoft, sheltered it—a precarious situation, to be sure, inasmuch as tech companies such as Google and Amazon are in the business of selling cloud storage to both government agencies and private individuals who might rightly object to their data being sold. Wichowski examines the behavior of net states IRL—in real life, that is—in such places as hurricane-damaged Puerto Rico, where Tesla and Google turned out to be more helpful than the federal government. She looks deeply into issues of privacy and the rights of technology users, whom so many of the net states seem to regard as mere troves of data. Wichowski notes that infrastructure improvements are likelier to be made by net states than “real” ones, all with a clear eye toward a future in which they are truly sovereign. She concludes her eminently accessible, deeply researched exploration by proposing that business models change so that consumers can more easily protect their data—but for a price, for “if our data, privacy, and sense of power are precious to us, then we need to offer something else that’s valuable. And just about everyone values money.” That may strike some as blackmail, but it seems eminently sensible given how much of it is afloat in the world, especially in the hands of nefarious actors.

Civil libertarians as well as geopolitics buffs and tech geeks will find much of value here.