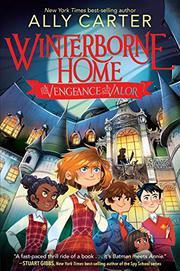 WINTERBORNE HOME FOR VENGEANCE AND VALOR

Ten years ago, Gabriel Winterborne, dramatically orphaned in childhood and heir to a vast fortune, mysteriously vanished; the five parentless children now living at Winterborne House may hold keys to his disappearance.

After accidentally setting a museum exhibit on fire, April, foundling, foster child, and group-home veteran, is rescued and hospitalized. She accepts an invitation from Isabella “Izzy” Nelson, Winterborne Foundation director, to live at Winterborne House—for now. (April’s mother had left a note—plus an ornate key—with infant April, promising to return for her.) Fellow child recruits include Violet, a timid artist; Tim, Violet’s foster brother and protector; and, already ensconced in the enormous mansion poised at cliff’s edge above the ocean, Sadie, an imaginative inventor; and Colin, a former Londoner with street smarts. All are under the care of Smithers, the Winterborne butler, and Izzy. Living in a smaller mansion nearby is Evert Winterborne, Gabriel’s uncle, who’s offered a reward for news of Gabriel. On a dark and stormy night, the girls awaken to a knife-wielding presence who steals April’s key. Mysteries mount rapidly: Who, or what, is the Phantom that so terrifies Violet? What caused Izzy’s antipathy to Gabriel? Among this likable bunch (race varied but unspecified, though April presents white on the cover), deadpan April’s a standout. If the corkscrew plot’s occasionally far-fetched, it’s fast moving and surprise-filled, guaranteed to have readers racing on to the next deliciously gothic complication.