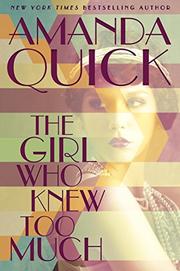 THE GIRL WHO KNEW TOO MUCH

Quick, who is Jayne Ann Krentz in thriller mode, moves her setting from Victorian London ('Til Death Do Us Part, 2016, etc.) to golden-age Hollywood.

Anna, private secretary to wealthy New England socialite Helen Spencer, finds her boss dead at her upstate New York lodge, apparently the victim of multiple stab wounds. The warning “Run” is written in blood on the wall. And run Anna does, after finding a letter from Helen, cash, and a leather-bound notebook. With the notebook, which contains arcane, scientific-looking squiggles, Anna heads for California, changing her name to Irene. She lands a job as a cub reporter with a Hollywood gossip rag, Whispers. A scoop is promised when starlet Gloria Maitland summons Irene to the exclusive Burning Cove Hotel on the Pacific coast. Irene hopes to glean juicy details about Gloria’s rumored affair with movie star Nick Tremayne, whose career is rocketing into that rarified strata previously reserved for Clark Gable and Cary Grant. Arriving for the midnight appointment only to find Maitland’s body floating in the pool, Irene barely escapes menacing footsteps behind her. Later, Oliver Ward, the hotel’s owner, helps Irene assess clues and risks. Oliver knows all about misdirection and distraction, tools he used to his advantage as a magician, a stint cut short by a crippling injury. Nick Tremayne and his studio handlers are obviously suspect. However, notorious womanizer Nick can hardly see gossip as a murderworthy threat. The mystery deepens as more women, among them another gossip reporter, die by drowning. Against her better judgement, Irene keeps a rendezvous with another Nick paramour at a deserted warehouse only to learn, unsurprisingly, that a deadly trap has been set for her and Oliver. Emerging unscathed, they come across the paramour’s unsurprisingly drowned corpse. Now Irene and Oliver must deploy his sleight-of-hand arsenal on two possible culprits, one a movie star, the other an East Coast lawyer with ties to Spencer. And of course, romance being Quick/Krentz’s default mode, Oliver must deploy his sleight-of-hand on Irene.

THE OTHER LADY VANISHES
by Amanda Quick
Fiction

'TIL DEATH DO US PART
by Amanda Quick
Fiction

THE MYSTERY WOMAN
by Amanda Quick