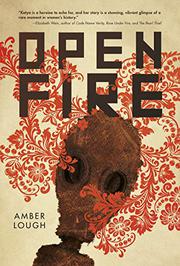 A country on the brink of revolution; a girl caught between ideologies.

Petrograd, Russia, 1917: As the war against Germany rages on, Katya does her bit for the war effort by working at a munitions factory alongside her best friend, Masha. With her father away at the front, Katya quit university to work and support her brother, Maxim, an ailing soldier with a gambling habit. Meanwhile, food shortages create room for new, revolutionary ideals to gain traction as she contemplates contrasts between the czar and the common people. During a women’s march, Katya reconnects with fellow student Sergei and gets embroiled with the Bolsheviks. Caught between her father’s loyalties to the czar, Sergei’s Bolshevism, and the reality of war, Katya eventually enlists in the historic all-female 1st Russian Women’s Battalion of Death, led by the infamous Maria Bochkareva. Taking place over a five-month period, this empowering story sees Katya go through highs and lows at home and at the front, speeding through grueling training to bond with and lead the inspiring women in her unit. Lough (The Blind Wish, 2015, etc.) offers a fascinating, if too fleeting, look into a complex political moment, following a young woman as she carves her own way and proves her worth in a hostile, divided world. All characters are white.