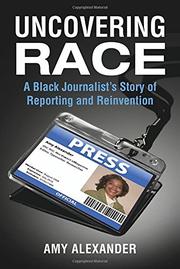 A consideration of how the mainstream media has grappled with race over the last 20 years.

Veteran journalist Alexander (Fifty Black Women Who Changed America, 1999, etc.) uses her own career as a lens for critically examining the industry’s efforts toward diversity, and how those efforts are faring through the Internet-era upheaval of newspapers and print media. She fears that the middling gains made by people of color in journalism since the 1990s have been eroded: “financial challenges in the news business are diminishing the numbers of talented, experienced reporters and editors of color.” Alexander sees many ominous trends, noting, for instance, that even though more reporters of color cover the White House, suggesting a more diverse era, “the Obama administration’s arrival coincided with the downward spiral of legacy news organizations.” She combines this argument with a look back at her own experiences in print, radio and online journalism. The author is most engaging when she provides incisive overviews of insider topics such as the Boston Globe plagiarism scandal involving Patricia Smith and Mike Barnicle, which seemingly represented a racial double standard, and the media mergers which she argues have made equitable minority representation even more difficult to attain. In wrestling with two difficult subjects—the challenges faced historically by people of color in the American news media, and the recent usurpation of traditional journalism by the Internet—Alexander writes with a clearly felt sense of passion and urgency, and she thoughtfully discusses key events of the last few decades, such as the Rodney King incident and its aftermath and the questionable role of media stars during traumatic events such as Hurricane Katrina and the Haiti earthquake. However, because long sections are devoted to her CV and personal travails, the author’s return to these central themes becomes unwieldy, creating a book that’s neither true memoir nor social polemic.

Perceptive regarding the fractures within the journalism industry, but at times pedantic.

WE MATTER
by Etan Thomas
Nonfiction

MY TIMES IN BLACK AND WHITE
by Gerald M. Boyd
Nonfiction

WHO'S AFRAID OF POST-BLACKNESS?
by Touré
Nonfiction