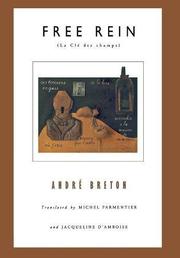  A compendium of the French surrealist's major prose writings, from 1936 to 1952, which intriguingly exposes Breton's limitations and datedness along with his besetting enthusiasms. This surrealist exemplar, like his colleagues, sought ``the liberation of the human spirit'' through perceptual experiment. His main literary tool in this was automatism, a method of composition that abandoned the rational in order to discover more intrinsic truths lodged in the unconscious. Breton's desires to ``transform the world,'' to ``change life,'' and to ``reshape the human mind'' were subversively political as well as aesthetic in purpose. But an abiding irony of his wordage is its dogmatism and stiff, bulging verbal edifice in a collection that includes memoir, political and cultural critique, aesthetic credos, public lectures, and all- purpose rants. Though historically a rebel, Breton also conveys the contrary urges of an institution-builder or party stalwart who is indulging in a few too many partisan, chastening pronouncements. In this translation, his style comes across as baroque, with some exceptions, as when the author was inspired to reply to a precocious 12-year-old girl's letter. She asked him, ``Do you think Americans are right to give so much freedom to children or is it better, as in France, to subject them to strict discipline? . . . Do you recommend artists such as Matisse and Picasso to children?'' Called on to radically simplify his position for a child with no prior assumptions, Breton could be fetchingly ingenuous and illuminating. ``Well,'' he conceded, ``if you had been able to question me earlier, you would have found me much more self- confident.'' The paradoxes implied by a once-vernal intelligence, which now come to seem rather Wizard-of-Oz-like, recommend a reconsideration of Breton's work.