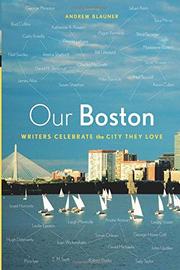 In response to the terrorist attack on the 2013 Boston Marathon, editor Blauner (editor: Central Park: An Anthology, 2012, etc.) presents a collection of essays celebrating the City on a Hill.

The lead essay, Kevin Cullen’s “Running Toward the Bombs,” harrowingly recounts the bombing attack that occurred on Patriot’s Day at the conclusion of the Boston Marathon and the manhunt for the perpetrators that followed. Cullen’s account is riveting, horrifying and ultimately inspirational in its depiction of the courage demonstrated by the first responders and ordinary citizens who reacted to the unimaginable trauma with selflessness and life-saving competence. The other writers included offer personal histories and reflections on the city without focusing on the attack (Cullen’s piece obviates the need for further elaboration) in a series of essays that range from wistful to (gently) sardonic. The contributors note Boston’s provincialism, distinctive dialect, confounding topography, and heritage as a center of American history, intellect and sport. Though nobly intended, the collection becomes repetitive in its litanies of fondly remembered landmarks and observations of the city’s distinctive character; the effect is somewhat like being subjected to the protracted narration of an unusually eloquent acquaintance’s vacation slides. The quality of the writing is uniformly high, and there are moments of welcome humor and surprise, but the standout pieces (excluding the heart-rending report of the attack) are reprints of George Plimpton’s “Medora Goes to the Game,” a droll and affecting account of the author and his young daughter attending the Harvard/Yale football game, and John Updike’s “Hub Fans Bid Kid Adieu,” the much-anthologized tribute to Red Sox great Ted Williams. Unencumbered by elegy, these famous essays more fully engage and entertain as well as pay deserved tribute. Other contributors include Susan Orlean, Bud Collins, Dennis Lehane, Leigh Montville and Pico Iyer.

A worthy and moving but monotonous paean to the resiliency and character of Boston.

IN THEIR LIVES
by Andrew Blauner
Nonfiction

GOODBYE TO ALL THAT
by Sari Botton
Nonfiction