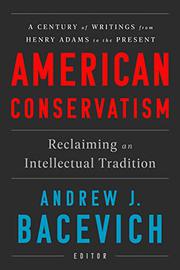 A collection of essays and speeches—mostly from the 20th century—that argue tacitly that today’s conservatism needs an intellectual reboot.

Bacevich (The Age of Illusions: How America Squandered Its Cold War Victory, 2020, etc.), who served as an officer in the Army, doesn’t include any of his own work in this wide-ranging volume. In the introduction, he makes patent his anti-Trump attitude, calling the president a “sleaze, narcissist, chronic dissembler, unscrupulous tycoon, [and] tax cheat.” The book is arranged thematically, and each section comprises pieces organized chronologically. Most of the contributors, drawn from a variety of disciplines and eras, are familiar: William F. Buckley Jr., Walter Lippmann, Whittaker Chambers, Reinhold Niebuhr, Zora Neale Hurston, John Crowe Ransom, Wendell Berry, Theodore Roosevelt, Henry Cabot Lodge, Joan Didion, Antonin Scalia, Milton Friedman, and Shelby Steele. The unspoken theme of many pieces is that conservatism once had a scholarly, articulate, even elitist foundation, but anyone who peruses today’s news knows that this has evanesced. Also present throughout the book are themes that have long occupied conservative thought: American power and war, anti-communism, religion in public life, isolationism versus intervention, regional rights, and free markets. In an essay from 1947, James Burnham argues that while race is a significant issue in America, it is not nearly as bad as it would be under a totalitarian regime. Unfortunately, many of the Southern writers ignore slavery and Jim Crow in their discussions of liberty. Also troubling: A number of writers urge the reining in of what they see as hurried social changes, a position that seems to suggest a desire to maintain the status quo. Bacevich acknowledges that most of his contributors are white males, but he doesn’t want to “falsify history” by including minority voices that were not prominent thinkers during their eras.

Eloquent if tendentious historical snapshots of the conservative tradition in American thought.

THE AGE OF ILLUSIONS
by Andrew J. Bacevich
Nonfiction

THE LIMITS OF POWER
by Andrew J. Bacevich
Newsletter sign-up