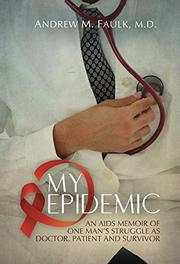 A survivor of the AIDS epidemic chronicles his unique role as both doctor and patient in this debut memoir.

Faulk was a physician during the AIDS epidemic. In fact, from 1984 to 1991, he limited his practice to patients with HIV, a population for whom the disease was viewed as a death sentence. The author possessed one thing that many other doctors of the time did not: He was infected with HIV himself. “In spite of my efforts to separate the two roles of doctor and patient,” he recalls, “every patient’s illness became a mirror of my own disease. Every time I walked into an examination room I was seeing me, talking to me, diagnosing me—in every patient I saw, I saw myself.” With this book, Faulk recounts his singular experience straddling both sides of the AIDS crisis. It is, in part, a narrative of death: The author treated some 50 patients who died as well as his partner and many of his friends. (As he labored to make them comfortable, he assumed his own death was imminent.) It is also a narrative of one community’s tremendous courage, empathy, and triumph in the face of an existential threat and a wider culture that turned its back on it. From his time in medical school, when he first caught wind of the disease at the edges of his social circle, to his long and ultimately tragic relationship with his partner, Jack, to his current marriage and activism all these years later, the author offers an account of love, loss, grief, and survival. Faulk’s prose is warm and wistful, and he describes the people in his life with great admiration and generosity. His bedside manner is present even in his descriptions of the hard times, as when he had to inform people of their diagnoses: “As part of this strategy, I wouldn’t answer questions which weren’t asked; I would wait for the patient to lead me to their hopes and fears. I wouldn’t rush. I would take my time.” The author’s experience makes him particularly suited to speak about the scope of the epidemic, and his story is a valuable window into a time that was not long ago and yet has become so difficult to imagine.