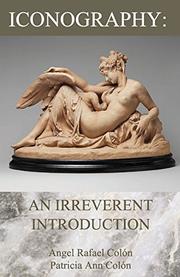 Visual art has always been pervaded by symbolic imagery, much of which would have been recognizable to historically contemporary viewers. But the same embedded meaning is largely unfamiliar to today’s audience, which is a barricade to more meaningful appreciation, according to authors Angel Rafael Colón and Patricia Ann Colón (co-authors: Tincture of Time: A Concise History of Medicine, 2013): “Most iconographic symbols, however, now appear arcane, unfathomable, begging for explication.” Only in the 19th century did iconology emerge as a formal field of study, but in such a prohibitively academic form, it’s of little use to the layperson. The authors cover the span of visual artistic production up until the 19th century, prior to the emergence of more abstract, less representational efforts. The first chapter covers Christian iconography; the majority of art between the 10th and 15th centuries displayed devotional themes. Chapter 2 talks about Western art in the Renaissance period, when mythology and allegory began to replace (or enact in a new setting) Christian themes; much of this art was saved from destruction by Arab scholars. The authors continue the theme of gradual secularization by examining the Dutch golden age, a period liberated from the need to depict Christian images in the wake of the Reformation. A fascinatingly morbid chapter explores the iconography associated with death and includes a particularly grim but gripping look at funereal depictions of deceased children. Finally, the Colóns include a discussion of what they call “iconographic erratics,” those pieces of art that defy conventional classification, like Francisco Goya’s El Tres de Mayo and Edvard Munch’s The Scream. The flawlessly clear writing is often charmingly lighthearted though just as consistently characterized by scholarly scrupulousness. The scope is dazzlingly broad, yet the treatment of any particular motif or artistic product never feels unsatisfyingly abridged. Also, the work abounds with hundreds of gorgeous photographs of art, meticulously parsed into their symbolic components and then carefully decoded.

It’s difficult to imagine what the authors could have done to improve this marvelous guide.

THE BUSINESS OF EXPERTISE
by David C. Baker
Indie

A YEAR OF LIVING KINDLY
by Donna Cameron
Indie

RIKO
by Denise B. Dailey
Indie

THE REFORMATION
by Diarmaid MacCulloch
Nonfiction