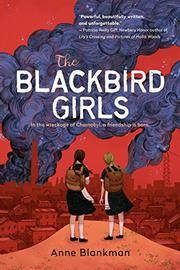 The citizens of the town of Pripyat, Ukraine, have always been assured that “an accident at a nuclear power station was a statistical impossibility.”

So when the morning of April 26, 1986, dawns red, with “unearthly blue” smoke billowing into the air, life proceeds as normal. Fifth grade classmates and rivals Valentina Kaplan and Oksana Savchenko, however, are worried. Their fathers, night-shift plant workers at the Chernobyl power station, have not yet come home. Soon word gets out that reactor No. 4 has exploded, killing several workers and sending the rest en masse to the hospital, poisoned by the very air they breathe. Forced together by the sudden evacuation, the girls must overcome both their hatred of each other and the grief heaped upon them by the accident as they forge a new life in Leningrad with Valentina’s estranged grandmother, who harbors a dangerous secret. Blankman spins a stunningly complex tale out of simple words. By focusing her account on only the two young girls, Blankman situates the seemingly distant horror of the disaster in a firmly human context. Extensive research on historical events, names, cityscapes, and living situations enriches the story, which alternates perspective among Valentina, Oksana, and Rifka, Valentina’s grandmother. Rifka’s chapters take place during World War II, which initially deflects focus from the story somewhat, but they quickly find their place as the story’s heart as they introduce the blackbird, a symbol of eternal friendship. Ukrainian characters are assumed white; Valentina’s family is Jewish.

Out of the nuclear fallout springs a moving tale of love and loss. (Historical fiction. 9-12)

CONSPIRACY OF BLOOD AND SMOKE
by Anne Blankman
Children

PRISONER OF NIGHT AND FOG
by Anne Blankman
Newsletter sign-up