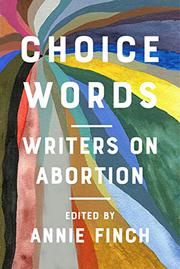 A powerful collection of poems, fiction, and essays on the reality of abortion.

“Every abortion is a story,” writes Caitlin McDonnell in her moving essay, “The Abortion I Didn’t Want,” one of nearly 150 pieces by a diversity of women (and a few men) that address what Katha Pollitt calls the “bloody realism and emotional and social complexity” of ending a pregnancy. Finch (Measure for Measure: An Anthology of Poetic Meters, 2015, etc.) has drawn together writers across time (from the 16th century to the present), place, race, ethnicity, gender, age, and culture who offer stark, often wrenching revelations. She organizes the book into five sections: “Mind,” focusing on making the decision to abort; “Body,” on the physical experience; “Heart,” on the depth of emotions; “Will,” on the relationship of abortion to personal and political power; and “Spirit,” on the connection of abortion to a woman’s spiritual framework. For many contributors, the experience of abortion reverberated forever after. Writes Desiree Cooper, “we were pregnant with memory for the rest of our lives.” Among the more well-known contributors are Margaret Atwood, Ursula K. Le Guin, Amy Tan, Audre Lorde, Leslie Marmon Silko, Joyce Carol Oates, Anne Sexton, and Gloria Steinem, who admits feeling no regret about her decision. Having an abortion, she writes, “was the first time I had taken responsibility for my own life.” The empowerment she felt, however, was not shared by many others, who faced contempt, blame, and shame. Argentine writer Mariana Enriquez portrays the anguish and fear of teenage girls who live “in a country where abortion is illegal” and where they take place in “ghost houses, anonymous houses.” Novelist Soniah Kamal gathers stories from three Pakistani women who had abortions in 1990 in a country where premarital sex remains a crime punishable by five years in prison. Particularly heartbreaking pieces recount the decision to abort a severely malformed fetus—one, a baby with no brain, whose parents, wracked with grief, were forced to travel from Belfast, where abortion is a crime, to Liverpool.

Eloquent contributions to the literature on a deeply contested issue.