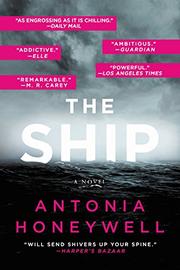 A sheltered teenager has an existential crisis while riding out the apocalypse aboard her father’s private ark in this dystopian debut novel.

Sixteen-year-old Lalage “Lalla” Paul lives comfortably in a secure flat with her wealthy parents, Anna and Michael. Outside, the environment is in ruins, resources are scarce, and the military-run government performs mass executions to reduce the population. Intent on providing a better life—and eventual death—for his family, Michael purchases a ship, stocks it with supplies, and selects 500 virtuous people to fill its berths; Anna, however, maintains it’s their moral obligation to stay in London and help the less fortunate. When someone shoots Anna through the living room window, Michael and Lalla carry her onto the ship, where she succumbs to her injury. The ship’s passengers then do battle with British troops and a starving mob before heading out to sea. Michael (who becomes a quasi-cult leader known as “Father”) encourages his new flock to forget the past and enjoy the present, but Lalla stubbornly refuses, whining about the lack of adversity, fixating on what’s happening back home, and obsessing over where the ship is headed. Even falling in love isn’t enough to distract the petulant, ungrateful Lalla from her endless cycle of adolescent angst and petty rebellion.

After a harrowing launch, Honeywell’s tale sails into the doldrums and sinks under the weight of haphazard plotting, uneven pacing, and subpar character work.