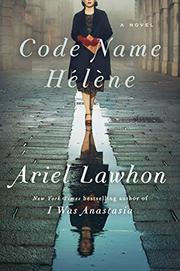 A historical novel explores the intersection of love and war in the life of Australian-born World War II heroine Nancy Grace Augusta Wake.

Lawhon’s (I Was Anastasia, 2018, etc.) carefully researched, lively historical novels tend to be founded on a strategic chronological gambit, whether it’s the suspenseful countdown to the landing of the Hindenberg or the tale of a Romanov princess told backward and forward at once. In her fourth novel, she splits the story of the amazing Nancy Wake, woman of many aliases, into two interwoven strands, both told in first-person present. One begins on Feb. 29th, 1944, when Wake, code-named Hélène by the British Special Operations Executive, parachutes into Vichy-controlled France to aid the troops of the Resistance, working with comrades “Hubert” and “Denden”—two of many vividly drawn supporting characters. “I wake just before dawn with a full bladder and the uncomfortable realization that I am surrounded on all sides by two hundred sex-starved Frenchmen,” she says. The second strand starts eight years earlier in Paris, where Wake is launching a career as a freelance journalist, covering early stories of the Nazi rise and learning to drink with the hardcore journos, her purse-pooch Picon in her lap. Though she claims the dog “will be the great love of [her] life,” she is about to meet the hunky Marseille-based industrialist Henri Fiocca, whose dashing courtship involves French 75 cocktails, unexpected appearances, and a drawn-out seduction. As always when going into battle, even the ones with guns and grenades, Nancy says “I wear my favorite armor…red lipstick.” Both strands offer plenty of fireworks and heroism as they converge to explain all. The author begs forgiveness in an informative afterword for all the drinking and swearing. Hey! No apologies necessary!

A compulsively readable account of a little-known yet extraordinary historical figure—Lawhon’s best book to date.

I WAS ANASTASIA
by Ariel Lawhon
Fiction

THE WIFE, THE MAID, AND THE MISTRESS
by Ariel Lawhon
Newsletter sign-up