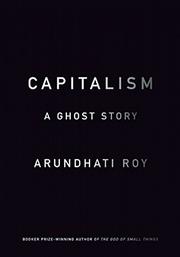 A vehement broadside against capitalism in general and American cultural imperialism in particular, focusing on the effects on the novelist’s native India.

After winning international raves and the prestigious Booker Prize for her debut novel (The God of Small Things, 1997), Roy (Walking with the Comrades, 2011, etc.) has become an increasingly political, polarizing and controversial writer, even charged with sedition in her homeland. “Day after day, on primetime news, I was being called a traitor, a white-collar terrorist, and several other names reserved for insubordinate women,” she writes. She also recognizes that, as someone “who lives off royalties from corporate publishing houses,” she risks biting the hand that feeds her. But her teeth are sharp, and her bite is fierce, as she focuses on how American corporate values and foundation philanthropy have had an insidious effect around the globe, resulting in a wider gap between the wealthy few and the impoverished masses. The influence extends from economics to education to arts and culture, as scholars in line with American values get funded and others see courses cancelled, while foundation support has had the same moderating effect elsewhere that it did in America, where it marginalized black militancy in favor of nonviolence. “Armed with their billions, these NGOs have waded into the world, turning potential revolutionaries into salaried activists, funding artists, intellectuals and filmmakers, gently luring them away from radical confrontation.” Like the Occupy movement, which Roy strongly supports, she sees class warfare as a political necessity that recognizes that systems of capitalist democracy require more than reform. Her accounts of political repression are vivid and moving, but her analysis would require more depth for her pontification to convert those who don’t already agree with it.

Less a reasoned argument than an impassioned manifesto.

THE MINISTRY OF UTMOST HAPPINESS
by Arundhati Roy
Nonfiction

THINGS THAT CAN AND CANNOT BE SAID
by Arundhati Roy
Nonfiction

WALKING WITH THE COMRADES
by Arundhati Roy
Nonfiction

THE COST OF LIVING
by Arundhati Roy
Fiction

THE GOD OF SMALL THINGS
by Arundhati Roy

DAYS OF DESTRUCTION, DAYS OF REVOLT
by Chris Hedges
Nonfiction