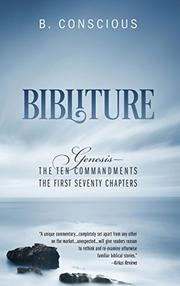 A unique commentary on the first portion of the Hebrew Bible.

The author, writing under the pseudonym B. Conscious, looks at the first 70 chapters of the Old Testament (from the books of Genesis and Exodus) through a very Eastern-styled lens. Having read the Bible during and after a two-year stay in Nepal, the author began to compare it to Hindu and Buddhist texts, and his own interpretations evolved from there. The stated motivation in writing this book is “to share the manner in which the first seventy chapters of the Bible offer humanity models of highly conscious individuals.” As a result, this is a commentary that’s completely set apart from any other on the market. Instead of focusing on common tools of exegesis or espousing a traditionally Jewish or Christian understanding of the text, the author instead presents a sort of parallel version of Scripture that teaches about consciousness and unity through quasi-historical tales of antiquity. The author follows up each scriptural passage with a set of questions and commentary. An oft-repeated question, “Who or what was the ‘God’ that…,” speaks to the author’s ambiguous concept of the deity. “References to ‘God,’ ” the author explains, “are references to that which is boundary-less and one.” These references can take on a variety of forms; for instance, “Consider the ‘God’ that was to allow ‘Noah and his sons’ to ‘Be fruitful’ as the collective voice of the women offering their dark, watery wombs so as to continue the light of consciousness from within their bodies.” In the author’s unusual version of the story of Moses and the burning bush, Moses’ meeting with God represents a “communion with the infinite, eternal, timeless present moment, which just is.” Further, the Ten Commandments are said to be about the qualities of conscious awareness, or, rather, about what life in conscious awareness looks like. The goal of humanity, the author says, is to grasp that state of unity and consciousness and become fully aware.

An unorthodox and unexpected work that will give readers reason to rethink and re-examine otherwise familiar biblical stories.

JESUS FROM INDIA TO JAPAN
by Abdelbaset Youssef
Nonfiction