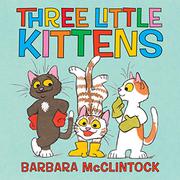 This adaptation of a traditional English nursery rhyme features a contemporary setting, dialogue, and a small twist.

Three anthropomorphized kittens wearing conspicuous, colorful mittens (but no other clothing) are seen outside a cozy suburban house, skateboarding, playing ball, and skipping rope. A sweet scent wafts from an open window, through which a smiling cat in a dotted apron can be seen removing a pie from the oven. In their race to the door the kittens lose their mittens, of course, and the story unfolds from there. In some cases, the rhymes appear in dialogue balloons, at other times as part of the main text, both of which also include additional, original lines. Unexpected interjections add humor, as when the kittens react to the mess they’ve made by eating blueberry pie while wearing mittens: “ ‘Ooops!’ ‘Eeew!’ ‘Gross!’ ” Created with pencil, watercolor, and gouache, McClintock’s feline portraits pack plenty of personality. Big-footed and slightly round-bellied, the variously colored kittens have big eyes and sweet smiles. Mother, meanwhile, is slim and sleek, with extremely expressive whiskers. The setting is simply presented, limited to the outside of the house, inside the kitchen, and at the table. At times the characters appear against blank, softly colored backgrounds. Alternating double-page spreads, single pages, and occasional panels add interest and move the action along smoothly. Sharp-eyed listeners may notice an additional character whose presence is acknowledged in the cheerful conclusion.

A sprightly and charming modern take on a traditional rhyme. (Picture book. 3-6)