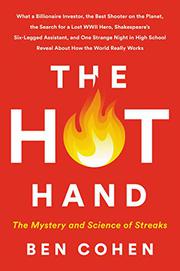 Is there a “hot hand,” the term basketball players use to describe that magical, endorphin-inducing moment when you can’t miss a shot and “achieve some elevated state of ability in which you feel briefly superhuman”? It’s one of the finest of psychological states, and if most of us don’t land in it regularly, there are people like Steph Curry to study, as the author does. By the numbers, Curry shouldn’t be the superstar shooter that he is—even though he’s 6-feet-3 he’s still smaller than most of the players he goes up against, a key datum point. What changed him was a summer spent teaching himself to shoot all over again: lifting the ball over his head and releasing it as he was jumping up, essentially making himself as tall as the defenders who would otherwise block his shots. That summer involved thousands of shots, and in the end, it made Curry “the best shooter the sport of basketball had ever seen.” This case study provides a springboard for Cohen to look at such things as the construction of data sets. One of the cardinal sins involving data is to make conclusions with numbers that are too small to support them—whence the “law of small numbers,” proposed by the Israeli psychologists Daniel Kahneman and Amos Tversky, who themselves have written an improbably brilliant hot streak of scholarly papers. Cohen examines the use of those data sets to crunch all sorts of perhaps unlikely problems: Is a supposed lost masterpiece by Vincent van Gogh the real deal? Did Raoul Wallenberg, the Swedish diplomat, really die of a heart attack, as the Soviets proclaimed, or did he die in the gulag? Cohen returns, always, to the game of basketball, but he pauses along the way to provide fascinating looks at coin tosses, investments, farm yields, and other real-world instances of how probability plays out in the world.

Sports fans and science geeks alike will enjoy these travels in the world where numbers, luck, and superstardom meet.