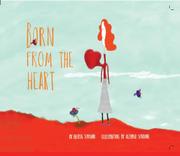 BORN FROM THE HEART

A well-intentioned, heartfelt effort to celebrate adoption ends up delivering problematic messages about fatherhood, birth families, and even the birds and the bees.

Cartoonish cover art shows a woman, Rose, with her heart protruding from her chest on a stemlike appendage. It’s not a grotesque image so much as it seems a feeble attempt to literalize the oft-stated line in adoptive families that children are, as the title says, “born from the heart.” This approach ends up making Rose appear pregnant, sort of…while her husband’s body remains unchanged. Is the child not born from his heart, too? Why not? Later, the doctor who has prescribed a “magic recipe” to Rose can “see something gleaming” in the prospective adoptive mother’s heart, akin to a sonogram image. This attempt, among others, to equate the adoption process with having a biological child seems to undermine the celebration of adoption by trying to make it “just like” having a biological child, suggesting that there’s something shameful about adoption itself. Then when the mother holds her new baby for the first time, the art depicts her lying on her back on the ground, her knees up and spread apart, in a quasi-birthing position. Other, much stronger titles about this important theme abound.

In sum, while this title has its heart in the right place, it misses a lot of beats in its efforts. (Picture book. 3-5)

I LOVE YOU LIKE CRAZY CAKES
by Rose Lewis
Children