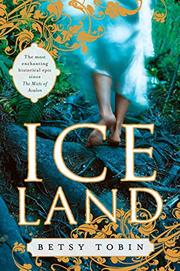 Tobin (Bone House, 2001) combines Norse mythology, the coming of Christianity and a forbidden love story in a lyrical but overstuffed tribute to Icelandic history.

The author juggles multiple narrative strands, sometimes confusingly or predictably. Freya, Norse goddess of love, falls under the spell of a miraculous, “too precious” golden necklace fashioned by the Brising dwarves (shades of Tolkien). Meanwhile, 16-year-old Fulla, an orphan whose father died in a feud, is approaching marriageable age but has secretly fallen for Vili, the son of her father’s killer. While the ancient witnesses, the Norns, keep watch on Iceland’s volcanic lands, Freya’s negotiations for the necklace oblige her to accompany Dvalin, the most attractive of the dwarves, on a journey to find a remedy for his sister’s infertility, which leads to further adventures and magic. Freya gains the necklace for a while, until it is stolen by Odin, king of the gods. He uses it to force Freya to kidnap Fulla, who has been fending off betrothals to men she doesn’t love and who is really Odin’s daughter. While Fulla is with Freya, Vili is accepted by her family and rejects his own, allowing Vili and Fulla finally to unite. A vast volcanic eruption lays waste the land, but Freya regains the necklace and saves Dvalin. The couple will become human and have children. And Christianity sweeps into Iceland.

Large themes translated into a choppy, conventional, romantic but readable tangle of stories.