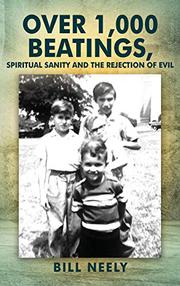 OVER 1,000 BEATINGS, SPIRITUAL SANITY AND THE REJECTION OF EVIL

Neely’s debut memoir explores his traumatic childhood and its impact on his spiritual life as an adult.

The author writes that he was the victim of daily, systematic violence between the ages of 4 and 18. At the hands of his 6-foot, 220-pound father, he says, he would suffer innumerable blows, insults, and other psychological abuse. By middle school, he’d come to recognize that “Dinnertime was the most dangerous time of the day” and that it could explode at any minute into violence. Neely alternates between memories of brutal childhood incidents in Pittsburgh in the late 1950s and early ’60s and moments from his aimless, troubled adulthood. After escaping the torment of his home life, he drifted around the country, joined the U.S. Marines in 1974, and later worked odd jobs, struggled with alcohol, and sometimes found himself homeless or in psychiatric institutes; he notes that he may have undiagnosed mental illnesses in addition to a confirmed dissociative disorder. With the help of Alcoholics Anonymous, Neely came to see himself as a detective trying to solve the mystery of his spiritual life, specifically examining “a sacred unknown” that he says has guided him through his turbulent upbringing and the dark depths of addiction. Throughout, he maintains that his father was a pure incarnation of evil, and as he calmly leads readers through his horrifying memories, he convincingly portrays that parent as a monster. Interjections from the author’s current perspective, however, are often bogged down by overly vague spirituality; for example, there are many repetitive, opaque references to “inner truth” and “deeper realms of thought.” When Neely narrates specific moments from his adulthood, though, he taps into some truly compelling and complex reflections, as when he tells of his identification with gay AA-meeting attendees’ stories of abuse, which he calls “inspirational in as profound a way as I thought possible.” His short stories about other abuse survivors he’s known close out his unusual and powerful work.

A difficult but often captivating look at the legacy of abuse.