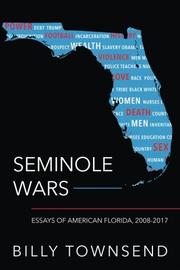 Townsend (Age of Barbarity, 2012) examines the nation’s ongoing cultural battles in this collection of Florida-centric essays.

As should be clear to anyone paying attention to current events, America still has quite a few unsolved problems involving issues of race, gender, poverty, addiction, political corruption, and general aggressiveness. These national issues are perhaps nowhere more visible than in Florida, and this is no recent phenomenon. Townsend, in this collection of essays, takes as his central metaphor the Seminole Wars of the early 19th century, particularly the first, when the United States military destroyed Spanish Florida’s “Negro Fort” at Prospect Bluff and killed the free black and Native American families who lived there. The intricacies of race, class, gender, and power have only grown more complex since, in both the country as a whole—whose father Townsend sees as being Andrew Jackson rather than George Washington—and Florida, in particular. The essays, written between 2008 and 2017, cover a range of Florida topics, mostly involving race and power. Townsend touches on obvious points of tension in recent years, including problematic practices of college football (including Florida State, whose team is called the Seminoles) and the murder of Trayvon Martin. The author digs deeper, however, introducing lesser-known stories, such as the career of a Polk County sheriff with a pro–National Rifle Association agenda. He also offers personal narratives, interrogating his own culpability in America’s failures. As he discusses such issues as the opioid epidemic, rape culture, and policing policies, Townsend dissects the lies that white America tells itself in the Sunshine State and beyond.

As the white, educated descendent of slave owners, Townsend is upfront about the privileged position he occupies in the power structure: “I still benefit, generations later,” he writes in the book’s introduction, “from Prospect Bluff’s obliteration.” He thankfully pulls few punches when it comes to calling out the hypocrisy that underlies Southern white culture. Throughout this book, he manages to do so without becoming preachy, demonstrating a genuine affection for his home state and mixing in enough of his personal passions to make him feel relatable and trustworthy. A typical essay is “The Missing Art of Squandered Whiteness,” an examination of white privilege that becomes a rebuke of mainstream country music’s lack of social critique as well as an exaltation of the alt-country band Drive-By Truckers. Townsend is at his best when he plays critic; his long review of T.D. Allman’s Finding Florida (2013), a popular work of Florida history, is another bright spot. Some of the newsier pieces have less life to them, resembling angry letters to the editor or dashed-off newspaper columns. As a whole, though, the essays make for compelling reading. They feel like dispatches from the front lines of today’s virulent culture wars, in which one man desperately tries to convince his peers to put down their guns and take a look in the mirror.

A slightly uneven but admirable set of essays on America’s social dysfunction.

THE EVANGELICALS
by Frances FitzGerald
Nonfiction

STRANGERS IN THEIR OWN LAND
by Arlie Russell Hochschild
Nonfiction