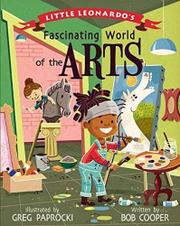 This entry in a series named for Leonardo da Vinci, an “original Renaissance man,” describes the many forms and functions of art in today’s world.

This colorful book shows very young children what art is and what different kinds of artists do. The author begins by listing several kinds of art as they appear in our lives, then describes historical art forms, such as cave painting and pottery design. Next, entire pages and spreads feature particular forms of art, artists, and materials, including sculpture, writing, drama, graphic design, architecture, and music. The role of computers in the creation of art today is mentioned, and readers are encouraged to imagine themselves as artists. The cartoon-style pictures show cheerful, ethnically diverse children in mainstream American settings creating art that often mirrors well-known pieces and styles of the Western tradition. A jazz band is included on the music page. An author’s note at the end of the book introduces six great artists of the past; three of these are women, but five of the six are white. While children throughout the book are representative of America’s diversity, readers will have to look elsewhere for inclusion of diverse contributions to the world of art. Volumes on math and science are similarly formulated but wordier. A page on anthropology in the science volume assumes a cultural perspective that all readers may not share.

For the dedicated nonfiction fan, this picture dictionary introduces media that are better experienced than described. (glossary, author’s note) (Nonfiction. 4-8)

HOT ROD HAMSTER AND THE WACKY WHATEVER RACE!
by Cynthia Lord
Children

DREAMING UP
by Christy Hale
Children