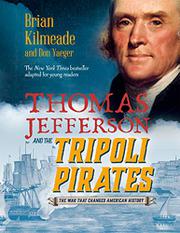 THOMAS JEFFERSON AND THE TRIPOLI PIRATES

The slimmed-down version of a 2015 account of the United States’ first war with the “Mohammedan world.”

Casting the Muslim lands of what were then dubbed the “Barbary States” as our young country’s “first enemy,” Fox News commentator Kilmeade and co-author Yaeger, who previously collaborated on George Washington’s Secret Six (2015) recount the course of this first, indecisive clash from the capture of the merchant ship Dauphin in 1785 to the 1805 treaty with the bashaw of Tripoli. (The second, more permanent clash in 1815 is covered in a brief footnote.) Jefferson was secretary of state and president for much of that period, but he seems rather dragged into the episode, coming off as a strong voice for a military solution to the conflict but never directly involved in events or negotiations. Moreover, though much is made of how captured American crews were enslaved by the treacherous, greedy local deys, there is no mention that Jefferson himself was a slaveholder. As the treaty was not won in battle, the authors deem it “tainted, but the conflict did demonstrate that “Americans were not to be trifled with” and allowed the U.S. to feel that “military force had helped regain national honor.” Small, sparse period illustrations are sometimes irrelevant or improperly placed. Wide margins, lots of blank pages, and eight perfunctory appendices pad the page count.