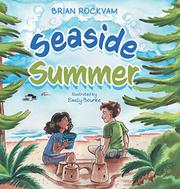 The poem’s narrator extols the virtues of spending one’s summer riding an “old school bike,” competing in a three-legged race and other sports, spending time in bodies of fresh- and saltwater, fishing or trapping crabs, and enjoying other wonders of nature. Along the way, the book shows families playing card and Monopoly games, and drinking hot chocolate and eating toasted marshmallows to end their nights. In a foreword, Rockvam notes that he spent summers at his grandmother’s British Columbia home in his youth, and his text captures a child’s glee in spending time with friends. Bourke, a Vancouver-based illustrator, lovingly presents the beautiful settings, showing a diverse array of people and highlighting the region’s scenery and wildlife. (One white family features most prominently, but children and adults with a range of skin tones make up the community.) The gouache-and-ink illustrations blend cartoonish characters and realistic animals, pairing them with descriptive rhyming stanzas, such as “Breaching whales, / slimy fish tails. / Oh look! There’s an otter!” The color palette emphasizes the bright blue of the skies and ocean, while warm oranges set off indoor scenes. One particularly lovely image shows shooting stars transforming into shining sea creatures as they fall. Rockvam’s poem—originally written eight years ago, when he was 17—uses accessible vocabulary with consistent rhythms and rhyme schemes across stanzas. Despite the phrases’ simplicity, the words conjure a deep sense of wistfulness. One use of slang to describe the Monopoly game (“it’s never lame”) feels a bit forced, but the rest flows well.

A vividly illustrated celebration of summertime that will resonate with readers young and old.