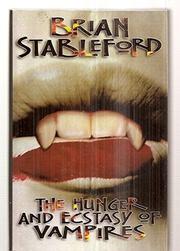 THE HUNGER AND ECSTASY OF VAMPIRES

 Stableford stumbles in a dull, talk-ridden minor novel that's simply not up to his terrific alternative-history vampire science/fantasy trilogy (Angel of Pain, 1993, etc.). As with that trilogy and 1991's The Empire of Fear, the present story is set in Victorian London, this time featuring such figures as Oscar Wilde, H.G. Wells, M.P. Shiel, parapsychologist Sir William Crookes, Nikola Tesla (the Croatian-American genius of electricity), and stand-ins for Holmes and Watson (characters still covered by copyright). These folks, and young-looking old vampire Count Lugard (spell that backwards and you get Dragul/dragon/Dracula), gather to hear a futurological tale by intrepid traveler Professor Edward Copplestone, who has just come back from his third hallucinogenic trip to the very, very far distant future. H.G., of course, is miffed, since his novel The Time Machine is now being serialized--and, he thinks, seriously plagiarized by Copplestone. The bulk of the story is descriptive, a kind of Gulliver's Vampires, telling of three successive civilizations based upon rule by vampires. In the first, humankind has been reduced to simpleton bovine bloodmakers for the superior race of vampires who live underground. In the second, the darkly brilliant vampires now make blood themselves in vats, having released mankind from servitude and having cross-fertilized the blood with creatures of Greek myth (satyrs and centaurs). In the third civilization, perfect peace descends in the absence of man altogether, but, says Copplestone, in the great scheme the vampires ``are our brothers and not our conquerors: They are our other selves, our heirs, our ambassadors to the universe.'' Lotsa rhetoric follows. Futurologically, this is a penlight beside such beacons as Franz Werfel's Star of the Unborn or Olaf Stapledon's The Last and First Men. As period British vampire fiction, it cries for at least a dollop of the saving humor displayed in Kim Newman's The Bloody Red Baron.

THE FOUNTAINS OF YOUTH
by Brian Stableford
Fiction