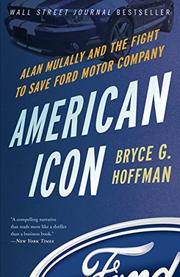 A Detroit News journalist’s in-the-room account of the resurrection of America’s most storied car company.

In 2006, Bill Ford Jr., the founder’s great-grandson, put aside the very real possibility of merger, even bankruptcy, and resolved instead to replace himself as CEO to try to save Ford Motor Company. He turned to a Detroit outsider, Alan Mulally, credited already with the post-9/11 resuscitation of Boeing and lured to Ford by the prospect of saving an “American and global icon.” How Mulally engineered Ford’s historic turnaround, transforming it into the world’s most profitable car company by 2011, will, no doubt, become the stuff of business-school case studies. Hoffman’s account will likely serve as the central text, but this is no dry classroom tome. As his paper’s Ford beat reporter, Hoffman covered the automaker’s unfolding story, conducting hundreds of interviews with major players and knowledgeable observers and then hundreds more to prepare this book. He opens with a quick and dirty history of the company and moves swiftly to Bill Ford’s courting of Mulally and the challenges facing the new CEO. Mulally immediately changed the company’s hidebound culture, insisting on teamwork, developing a recovery plan and working that plan relentlessly, surveying the entire business weekly to measure progress. By winning over the Ford family, the country’s “last great industrial dynasty,” by securing a crucial loan just prior to the credit crisis, reducing the number of brands, matching production to customer demand, investing in advanced technologies, improving fuel efficiency, reaching a groundbreaking agreement with the UAW to reduce labor costs, fending off corporate raiders, and convincing the public to buy what Ford was selling—a task made easier by the company’s well-publicized refusal to accept the government bailout GM and Chrysler required to survive—Mulally triumphed. With colorful anecdotes, sharp character sketches, telling details and a firm understanding of the industry, Hoffman fleshes out every aspect of this tale, reminding us of the hard work, tension and high-stakes drama that preceded the successful result.

A valentine, yes, but a thoroughly deserved one for Mulally and Ford.

WAR AT THE WALL STREET JOURNAL
by Sarah Ellison
Nonfiction

ONCE UPON A CAR
by Bill Vlasic
Indie