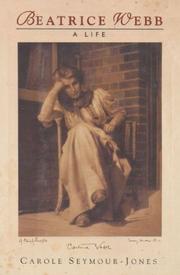  It seemed unlikely that Beatrice Webb (nÇe Potter: 1858-1943)- -the eighth of nine daughters in a wealthy Victorian family--would develop into a political scientist and marry homely, impoverished Sidney Webb, with whom she founded the London School of Economics and The New Statesman. A ``reworking'' of the Victorian ideal, according to fellow British writer Seymour-Jones, Webb's success was personally costly. Webb suffered from what she called a self-described ``double- mindedness'': a conflict between her conscience--the intellectual and altruistic side of her nature--and the sensual side. Contemporary ideas, in which Webb was steeped, presented more conflicts: Darwinism, socialism, positivism, religious revivals, and, amid the worship of domesticity, the new feminism characterized by the emergence of such women as Octavia Hill and Florence Nightingale. Webb saw the whole world divided into this doubleness, as either ``artist, anarchist, and aristocrat'' or, like herself, ``benevolent, bourgeois, and bureaucratic.'' Repressing her pleasure-loving side, dedicating herself to the poor, marrying the devoted but sexually unappealing Sidney--all, according to Seymour-Jones, led Webb into mental instability, and emotional hardness. Webb's sense of personal deprivation was relieved by exciting work (investigating trade unions; writing); interesting friends (Bertrand Russell; G.B. Shaw; Leonard and Virginia Woolf); world travel; and acclaim, when the Labor Party acquired power. When the Webbs died--she at 85, Sidney at 88--they became the first married couple to be buried at Westminster Abbey. Webb left out of her autobiography (published in the 20's) details of what she called her ``love affairs''--which, however, were dismissed by Shaw as ``states of mind,'' a judgment validated by details Seymour-Jones provides in this lucid and objective life.