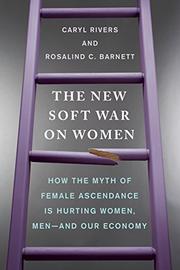 THE NEW SOFT WAR ON WOMEN

Called a “soft war” due to the insidious nature of today’s gender discrimination, Rivers (Journalism/Columbia Univ.) and research psychologist Barnett (co-authors: The Truth About Girls and Boys: Challenging Toxic Stereotypes About Our Children, 2011) collaborate to chronicle the ongoing marginalization of women, on levels ranging from executive to domestic.

On the surface, things seem to be improving, write the authors. However, their collected data reveals little being done to stem the flow of all-too-prevalent societal discrimination against women. Interviews conducted with female attorneys, physicians, executives and professors reflect decades of inequities in the modern workplace, the result of everything from rampant hypersexualization, unbalanced wages and unfair perceptions to promotions based on performance and not on future potential. The authors’ detailed examination draws heavily on statistical data, demonstrating how widespread the railroading of women has been over the last 40 years in less-obvious places such as classrooms and in the home, where expectations force many to forfeit professional careers in favor of caregiving and child-rearing. The authors admit that while great strides have taken place in the gender equality movement itself, these advancements and opportunities for women are hardly commensurate to those afforded to male contemporaries, leaving women lacking both the compensation and the influence necessary to advance within the corporate arena, or anywhere, for that matter. Alternately, there are those who’ve persevered. Influential women like Katie Couric, Meg Whitman and Hillary Clinton are among the many powerful women referenced who’ve bent to counterproductive societal biases, yet thrived in positions of power. Though the authors admirably expend the bulk of their energies demarcating festering stereotypes, they don’t use their collective voice to provide resource material on how proponents can support change on a grass-roots level.

SHE WORKS/HE WORKS
by Rosalind Barnett

LEAN IN
by Sheryl Sandberg
Nonfiction

A UTERUS IS A FEATURE, NOT A BUG
by Sarah Lacy
Nonfiction