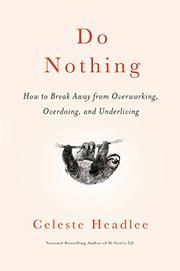 How To Break Away From Overworking, Overdoing, and Underliving
by Celeste Headlee
BUY NOW FROM
AMAZON
BARNES & NOBLE
LOCAL BOOKSELLER
GET WEEKLY BOOK RECOMMENDATIONS:

An argument against the notion that “our carefully designed strategies and gadgets will make us better.”

As a popular radio host, journalist, and speaker, Headlee (We Need To Talk: How To Have Conversations That Matter, 2017) has plenty of experience in trying—and often failing—to achieve the so-called work-life balance. “While I’d always been driven, I’d also been exhausted, stressed, and overwhelmed,” writes the author of her years of struggle to advance her career, pay the bills, and manage the responsibilities of being a single mother. She had hoped that “when I achieved financial stability, my stress would end.” However, the opposite was true: Once she was offered bigger money for speeches and other jobs, it was tougher to turn them down. “If your goal is less stress and more happiness,” she writes, “years of scientific research have proven that better than trading your time for money, it’s best to trade your money for time.” Easier said than done, and though Headlee remains highly productive, with a schedule that will leave many readers breathless, she does an effective job of showing how the Industrial Revolution changed the time-money equation, how multitasking makes us less focused and efficient, why connecting online rather than engaging in human interaction can be dehumanizing, and how you can feel better about your life by acting kindly. Among her many suggestions: Engage in conversation with four strangers per day; keep track of how you are spending your time, because you’re probably not as busy as you think you are; and acknowledge that downtime can make you more creative and productive as well as happier. Readers are advised not to take the author’s title literally, because there is so much that can be done to reassert the importance of leisure in life, including reading a book about it.

Headlee offers little groundbreaking information, but her advice is well taken and will prove useful for harried readers.