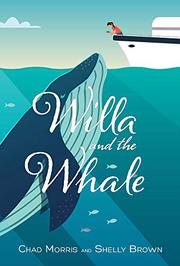 WILLA AND THE WHALE

In the wake of her mother’s sudden death, Willa navigates a new course with her blended family and friends on an island off Washington state, with the help of a humpback whale.

After her parents divorced three years ago, Willa moved to Japan with her marine biologist mom. Now back on Tupkuk Island, Willa, 12, struggles to adapt to her dad, new stepmom, three younger stepsiblings, and new baby. When she’s on a welcome-home, whale-watching cruise with her dad, a humpback breaches close by and speaks to her. Willa, an exceptionally well-informed marine enthusiast, is enchanted. When Willa calls her from the beach, Meg, a mature female who’s birthed and nurtured offspring of her own, offers a sympathetic ear and valuable advice on reinstating her friendship with Marc, her former best friend, coping with an overbearing, competitive classmate, and managing the mortification of being among the slowest on the swim team. Most of all, Meg’s there when Willa needs to pour out the grief that overwhelms her. Willa’s journals and many marine references express her passion for the ocean while introducing fascinating, lesser-known wonders of the deep. Latinx Marc and his family excepted, the likable, rounded human characters are presumed white. Mysterious, amazing, threatened, but enduring, the ocean itself conveys the enormity of grief and possibility of healing; plausible, appealing Meg’s especially engaging. As Willa says: “everyone should definitely have their own whale.”

Moving and buoyant, an insightful tale of grief, loss, and resilience. (Fantasy. 8-12)

MUSTACHES FOR MADDIE
by Chad Morris