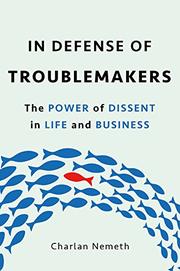 IN DEFENSE OF TROUBLEMAKERS

The Power of Dissent in Life and Business
by Charlan Nemeth
BUY NOW FROM
AMAZON
BARNES & NOBLE
LOCAL BOOKSELLER
GET WEEKLY BOOK RECOMMENDATIONS:

Just say no: an examination of how the naysayers in the audience can help individuals and organizations make better decisions.

In our lives and work, most of us go along to get along, admonished by adages about rocking the boat and getting hammered down if imitating a nail. But, urges psychologist Nemeth (Psychology/Univ. of California), that’s not the best approach. “We benefit,” she writes, “when there are dissenting views that are authentically held and that are expressed over time.” One of her cases in point is the movie Twelve Angry Men, with Henry Fonda as a juror who refuses to give in to the will of the majority to convict. The movie is used in the psychology classroom as a prime example of how a person with conviction can sway doubters, and it “demonstrates the art of influence, which includes timing, an observation of subtle cues from others, and knowing when to talk and when to listen.” Another case in point is the example of the devil’s advocate, appointed in the Catholic hierarchy to say, “yeah, but” when a person is considered for sainthood. By implication, every organization might do well to shake off the cobwebs and have someone throw up doubt whenever a major decision is being discussed. Even the Supreme Court values dissent, writes Nemeth, since it “has been found to increase what is called the integrative complexity of the Court’s decisions”—i.e., dissent forces an examination of all sides of an issue and the trade-offs involved in making one choice over another. Unanimity, in that view, is bad. Not much of the book centers on the workaday business world, where being a reliable spoilsport can get a person not valued but removed. However, with the necessary adjustments, it’s easy to see that this largely academic argument could be made accessible for laypersons.

Good ammunition for contrarians and well grounded in scholarly research.

THE TOOLS OF ARGUMENT
by Joel P. Trachtman
Nonfiction