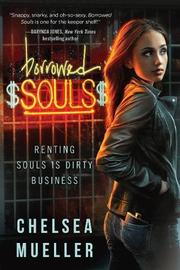 In Mueller's debut novel, a young woman struggles to save her brother from the mob but is sucked into a world of shady magic and a partnership with a handsome bad boy.

Callie Delgado has always believed that family comes first—even when family abuses that loyalty. When her brother Josh's drug addiction embroils him with organized crime, she tries to clear his debts via bad bargains with his dealers—and with the Soul Charmer, Gem City's creepy trader in souls. Need to cheat on your spouse or embezzle some funds? Do so with a rented soul, and keep your own sin-free, with the tacit endorsement of the Catholic Church! Mueller sets up an interesting modern take on historical indulgences but, sadly, offers a conventional paranormal romance instead. Granted soul-sensing powers by the Charmer, Callie is partnered with his ruggedly handsome enforcer, Derek, to do repo on overdue souls. But Callie spends more time making out—or dwelling on her empty bank account and sense of guilt—than she does actually exploring the potential of tradeable souls. The plot rides around on Derek's obligatory motorcycle from one soul reclamation to another, as Callie and Derek uncover a vaguely sketched plot by an equally vague villainess to do...something with people's souls, anyway. (A full explanation looks like it's coming in the sequel.) There's a concurrent plot—also vague—that requires Callie, a woman with no criminal skills, to steal evidence for the mob from a police station. The real challenge is whether Callie can open her wary heart to brooding-but-soulful Derek and learn to love again. (She can.)

A quick, if predictable, ride for urban fantasy fans. Mueller tries for emotional depth with her leads, but the themes of guilt and family are handled too heavily to get much traction.

Beyond The Veil
by Pippa DaCosta
Children

A SHIVER OF LIGHT
by Laurell K. Hamilton
Newsletter sign-up